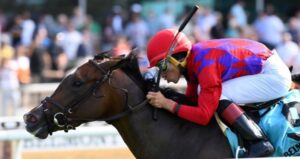 Trained by Jorge Abreu, the Flintshire bay captured the open-company Wild Applause traveling one-mile in June over the Belmont turf and followed with a pair of graded efforts at Saratoga Race Course, finishing fourth in the one-mile Grade 3 Lake George in July and second in the 1 1/16-mile Grade 2 Lake Placid in August.

Runaway Rumour enters from a closing third in the one-mile Pebbles, an open-company test won by Spanish Loveaffair by 2 1/4-lengths over returning rival Jordan’s Leo.

With Jose Lezcano up for the Pebbles from the outermost post 11, Runaway Rumor settled in ninth position before launching a five-wide rally in upper stretch to finish one length to Jordan’s Leo.

“She shows up every time she runs and it’s been against open [company],” Abreu said. “She always shows up. Last time, she was compromised with the post position in a big field of horses. She was maneuvering herself around there.”

Out of the Elusive Quality mare Elusive Rumour, Runaway Rumour is a half-sister to her multiple stakes-winning stablemate Myhartblongstodady – a 6-year-old daughter of Scat Daddy.

Abreu said the half-siblings are markedly different in demeanor.

“They have very different attitudes. Myhartblongstodady is a little tougher than she is,” Abreu said. “Runaway Rumour is doing great. She came out of her last race really well.”

Four-time Eclipse Award-winning trainer Chad Brown has entered Fluffy Socks and Higher Truth in search of a fifth Sands Point win following scores with Ball Dancing [2014], Uni [2017], New and Improved [2019] and a year ago with Tamahere.

Head of Plains Partners’ homebred Fluffy Socks won 3-of-5 juveniles starts, closing out her campaign with a half-length score in the one-mile Grade 3 Jimmy Durante over firm Del Mar turf.

The Kentucky-bred daughter of Slumber is in search of her first win this season having posted a record of 4-0-2-1, including a closing third last out on August 21 in the nine-furlong Grade 1 Del Mar Oaks.

“She’s training quite well. She should show a late-closing turn of foot,” Brown said.

The talented bay graduated at second asking traveling 10 furlongs on the Belmont turf in April ahead of a 10-furlong allowance win at Belmont in June before hitting the board in all three legs of NYRA’s Turf Triple series for fillies.

Higher Truth was a solid third in the 10-furlong Grade 1 Belmont Oaks Invitational in July – a race that the winner, Santa Barbara, exited to win the Grade 1 Beverly D. at Arlington Park.

In August, Higher Truth finished a game second to Belmont Oaks runner-up Con Lima in the 1 3/16-mile Grade 3 Saratoga Oaks Invitational ahead of a pacesetting second last out in the 11-furlong Jockey Club Oaks Invitational.

“I think she’ll be able to handle the cutback. She’s been training well,” Brown said.

Irad Ortiz, Jr. will step aboard for the first time from post 5.

Although winless in six starts since the Miss Grillo, Plum Ali has hit the board twice with a third in the one-mile Grade 2 Appalachian in April at Keeneland in her seasonal debut, which was followed by a closing second in the nine-furlong Grade 3 Wonder Again in June at Belmont.

Trained by Christophe Clement, the First Samurai chestnut enters from a wide-rallying fifth in the Pebbles.

StarLadies Racing’s Jordan’s Leo made her first four starts on dirt, including a second-out graduation in April sprinting six furlongs at Gulfstream Park.

Following an even third in a 1 1/16-mile allowance test against older company in June over Big Sandy, Hall of Fame trainer Todd Pletcher entered Jordan’s Leo in a nine-furlong optional-claiming event on the Saratoga turf August 11 and the Malibu Moon bay responded with a prominent half-length score over next-out allowance winner Town Avenger.

“I wasn’t sure she was a turf horse early on, so we gave her an opportunity on the dirt,” Pletcher said. “We breezed her on turf and she showed a little improvement. Her allowance win at Saratoga verified that.”

Jordan’s Leo enters from a forwardly-placed second in the Pebbles.

“She has tactical speed so she can put herself in a good spot depending on the pace scenario,” Pletcher said.

Rounding out the field are Our Flash Drive [post 8, Dylan Davis], a graded-stakes winner on Tapeta and turf at Woodbine for Hall of Fame trainer Mark Casse; Harajuku [post 3, Junior Alvarado], a Group 3-winner in France in May, who finished third last out in her North American debut in the Jockey Club Oaks; and Chiefswood Stables’ homebred Third Draft [post 1, Javier Castellano], runner-up in the restricted Riskaverse in August at the Spa.