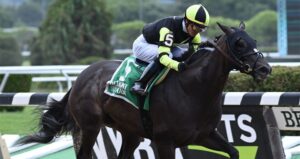 Dennis Narlinger’s New York-bred Sadie Lady returns for trainer Rob Atras off a four-month layoff in Saturday’s $100,000 Garland of Roses for fillies and mares 3-years-old and up going six furlongs over the main track at Aqueduct Racetrack.

A 5-year-old daughter of Freud, Sadie Lady collected two stakes victories this year with a gutsy win in Aqueduct’s Correction against open company by a head in March and a convincing 1 ½ length score in the Dancin Renee versus fellow state-breds at Belmont Park in June. She also earned her first graded stakes placing this year with a runner-up effort in the 6 ½-furlong Vagrancy Handicap at Belmont on May 8, beaten 2 ¼ lengths by multiple graded stakes winner Victim of Love.

The Garland of Roses will be career start number 22 for Sadie Lady, making her first appearance since the Union Avenue against state-bred company at Saratoga Race Course on August 19. Finishing fourth in the field of five, she set the pace for the 6 ½-furlongs over the sloppy main track before weakening as the 3-5 favorite. Atras said time off was the best solution for the mare, finding no apparent reason for her non-performance.

“We sent her back to the farm in Florida and gave her about 30 days before she came back up and seemed like her old self again,” said Atras. “She has been breezing really well and we are looking forward to getting her back again. We gave her time last year too and she really responded to it.”

The dark bay mare received four months away from the races in 2020, resting up after a third in an optional claimer last July. She finished out the year with an optional claiming victory in her second start off the layoff, finishing 2 ½ lengths the better of Call On Mischief, who she will face again on Saturday.

Sadie Lady will be reunited with Kendrick Carmouche on Saturday for the first time since finishing second together in the Vagrancy. Carmouche, who returned to the saddle on September 5 after recovering from a spill at Belmont on June 5, has piloted the mare to three of her eight career victories.

“I’m looking forward to him getting back on her,” Atras added. “Her game is running on the lead and we aren’t going to change it. She’s run some really good races at Aqueduct and I think she really likes this surface. She’s a fighter and battles all the way to the wire.”

Previously trained by Arnaud Delacour, Sadie Lady made her first start for Atras in December of 2019 and has won or finished on the board in eight of her 12 starts since. Now consistently competitive at the stakes level, Atras says Sadie Lady has shown great improvement.

“When we first had her, she ran a poor race where she didn’t get out of the gate good,” Atras said. “We dropped her a notch in company and she won and climbed the ladder from there. I think she got confident and matured into this kind of horse. She’s a very special mare.”

Sadie Lady posted a four-furlong breeze on December 5 in her final preparation for the Garland of Roses, covering the half-mile in 51.32 over Belmont’s dirt training track.

“She galloped out very good in her last work and she’s showing us that she’s ready,” Atras said.

Carmouche will pilot the mare from post 6 in the field of seven fillies and mares.

The daughter of Constitution has compiled a short but respectable resume, breaking her maiden in her second start this January over Aqueduct’s main track before finishing sixth in her first start against winners in Turfway Park’s Cincinnati Trophy.

The dark bay filly found the winner’s circle again in her next start when she took down the six-furlong Cicada at Aqueduct in March. Racing a length off the pace down the backstretch, Just Read It made her move entering the stretch and kicked clear at the three-sixteenths pole, digging in gamely to hold off a late bid from runner-up Exogen by a head.

After her Cicada victory, Just Read It was away from the races until her return November 3 with a third-place effort in an optional claimer at Churchill Downs. Handal said the effort helped to season the filly.

“She’s doing well,” he said. “She needed that first race back at Churchill. She broke a little flat footed and then ran up into heels a little bit, but when she got out into the clear she really took off. She galloped out a mile past everybody. I have a lot of confidence in her coming into this race second time off the layoff.”

With Sadie Lady likely to set a quick pace, Handal said he is in favor of how the race should shape up.

“She’s a horse that likes to rate and come from off it, so that should help her,” he added.

Manny Franco will ride the filly for the first time from post 4.

Trainer Cherie DeVaux brings 4-year-old filly Song River into the mix off a pair of allowance wins for owner Corser Thoroughbreds. The daughter of Liam’s Map earned her second win of 2021 in a September 5 allowance at Saratoga, defeating five foes that included Glass Ceiling, who also runs in the Garland of Roses.

She followed up her Saratoga victory with a win in her latest start, an optional claimer at Churchill on November 13. Despite a poor break, the filly was the decisive winner by 1 ¼ lengths under jockey Brian Hernandez, Jr.

Song River flashed her talent as a 2-year-old, finishing third in both the Hollywood Beach at Gulfstream Park and the Juvenile Fillies Turf at Gulfstream Park West. The dark bay filly will look to secure her first career stakes win after making the successful switch to dirt in September.

Hall of Famer Javier Castellano has the call from post 7.

Should Michael Foster’s Glass Ceiling find the winner’s circle on Saturday, it would give trainer and co-owner Charlton Baker back to back Garland of Roses wins after taking last year’s running with Honor Way. Baker also won the 2014 edition with Expression.

Glass Ceiling enters the Garland of Roses off a solid effort in the second division of the Pumpkin Pie at Belmont on October 31, defeated just a head by eventual Grade 3 Go for Wand winner Lady Rocket. A four-time winner, the 4-year-old daughter of Constitution breezed four furlongs in 48.45 over Belmont’s dirt training track on December 4 in her final preparation for the Garland of Roses.

The Garland of Roses is slated as Race 8 on the nine-race card. First post is 12:20 p.m. Eastern.

The Garland of Roses, which will be run for the 28th time on Saturday, is named for Hobeau Farm’s winner of Delaware Park’s Parlo Turf in 1974 and Hialeah Park’s Grade 2 Black Helen in 1975. Garland of Roses was also the runner-up in the Grade 2 Firenze at Aqueduct in 1973 and 1974 and the Grade 2 Bowling Green at Belmont in 1974.