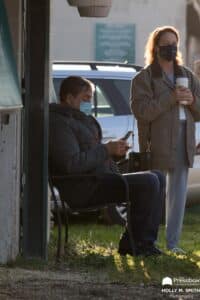 Flightline was racing’s worst-kept secret when he made his debut on April 24 at Santa Anita.

The precocious $1 million son of Tapit was favored at 9-10 and won the six-furlong sprint by 13 ¼ lengths. His salient supporters pressed their luck at 20 cents to the dollar next out, an optional claiming race also at six furlongs, this at Del Mar Sept. 5

Next up: the prestigious Grade I Runhappy Malibu Stakes at Santa Anita on opening day Sunday, Dec. 26.

Towards that goal, Flightline worked five furlongs at 6:30 Sunday morning in 1:00.20 under regular rider Flavien Prat.

“He went real well in a minute flat and galloped out (seven furlongs) in (one) 25,” said trainer John Sadler. “He just cruised around there in his last work before the race.

“He’s trained up to the race super; we’ve had our eye on the Malibu for a couple of months. It’s the right conditions, three-year-olds, a Grade I at seven-eighths which we think is going to be a good distance for him.

“It will be his first time against better horses but we’re excited about the challenge.”

On paper, the obvious competition would appear to come from Dr. Schivel, winner of five straight races including two Grade I’s before suffering an excruciating nose defeat in the Breeders’ Cup Sprint at Del Mar Nov. 6.

Flightline will be the Malibu’s post time favorite, with Dr. Schivel, favored in four of eight starts, relegated to second choice.

Prat has ridden Dr. Schivel in his last five starts and Flightline in his two races, but stays with the latter in the Malibu.

Dr. Schivel worked this morning for the Malibu, going a half-mile in 48.20 for trainer Mark Glatt.  Opening Day entries were taken this morning and will be available later in the day at santaanita.com

Art Sherman, racing’s David who slew the game’s Goliaths with an unlikely slingshot named California Chrome, will be honored by Santa Anita Sunday on the occasion of his retirement at 84 after a career as a jockey and trainer spanning six decades.

Sherman left the Williamsburg section of Brooklyn when he was seven years old, later fleecing contemporaries in the jocks’ room playing gin rummy at old Jamaica Race Course in the late 1950s as the standby rider on the New York circuit, and later still becoming a successful trainer, winning 2,261 races.

In either case, it’s been a wild ride.

“There are some things Faye (his wife approaching 60 years) and I want to do, and right now I’m closing down my barn (at Los Alamitos) where I’ve got a lot of tack and the kids are coming for the holidays,” Sherman said when asked his immediate plans now that the reality of retirement has taken hold.

“I just sold my place in Cypress (near Los Alamitos, Sherman’s training headquarters and home of California Chrome during his glory years), so I’m moving out of there. I’ve got a lot of things on the agenda right now.”

One that fortunately is not, thankfully, is his health.

Sherman, who turns 85 next Feb. 17, had surgery to remove a cancerous tumor from his bladder in March 2019 but is now cancer-free. “That issue is behind me,” he said, “so that’s great.

“I don’t know what more I can say about California Chrome. Everything’s been written about him. I was on two radio shows recently, one in Kentucky, TVG did a nice piece on me that will be aired before long and (Los Alamitos owner Ed) Doc Allred threw a catered party for me attended by about 100 people.”

Sherman saddled his last horse Dec. 10 at Los Alamitos, 9-1 shot Alchemy finishing seventh under jockey Wayne Barnett, but win or lose, Sherman maintains a level head, a trait which has helped him succeed on a long and daunting road and established him as one of game’s most revered ambassadors.

“Art is a great guy who follows the Shoemaker model,” said Brian Beach, former agent for Victor Espinoza who rode California Chrome to victories in the 2014 Kentucky Derby and through 2016 when he won his second Horse of the Year title.

“He doesn’t get too high on the highs and too low on the lows, and we had a couple major losses, losing the Belmont in pursuit of the Triple Crown and losing the Breeders’ Cup Classic.

“Art was always the same. He never blamed Victor, was easy to deal with and a straight shooter. He’s just a lovely man.”

Recalled Sherman: “I’ve met a lot of nice people all over the world, meeting all the foreign owners and trainers in Dubai, was next to the Queen at Royal Ascot. These are things you will always remember.

“Maybe we can go next year if things loosen up a bit, but right now it’s a real hassle to travel abroad.”

“Things are coming to an end,” Art mused. “We’ve seen all the best of this game, all the great horses that ran at Santa Anita when I was young, but racing is different now.”

Sherman developed California Chrome into a masterpiece of form and function achieving international success and acclaim, contributing mightily to positive exposure the game sorely needs, and it paid off for him.

Available to those 21 and older, the Craft Beer and Cider Festival will include LA’s best food vendors and food trucks, both trackside and near Santa Anita’s Kingsbury Fountain on the west end of the Paddock Gardens.

In addition to the Grade I Runhappy Malibu Stakes, the Grade I American Oaks and the Grade I La Brea Stakes, the card is amply and ably supported by the San Antonio Stakes, the Santa Anita Mathis Mile and the San Gabriel Stakes, each a Grade II event.

If there’s one special day to enjoy racing at Santa Anita this meet, it would appear to be Sunday.

Per the Los Angeles County Department of Public Health Mega Event Guidelines, fans 12 and older must provide proof of vaccination status prior to entering Santa Anita. Alternatively, fans can show proof of a negative test result (taken within 72 hours from date of event).

This year’s calendar features many never-before publicized archival photos of The Great Race Place dating back to its opening on Dec. 25, 1934.

From crowd shots to photos of legendary racing figures such as George Woolf, Gordon Glisson, Johnny Longden and Bill Shoemaker, the calendar also features racing and architectural photos depicting technological advances offered in a “compare and contrast” format each month.

After opening day, the wall calendar will be on sale in the track’s gift shop, Champions! Gifts & Apparel.

FINISH LINES: Among the 270 recorded workouts Sunday were a seven-furlong move by Doug O’Neill stalwart Hot Rod Charlie in 1:27 for the Grade II San Antonio Stakes; five-furlong training track drills by Phil D’Amato trainees Going Global and Burgoo Alley, each 1:00.80 for the American Oaks; and Zenyatta winner Private Mission, five furlongs in a bullet 58.60 for Bob Baffert, who is preparing the daughter of Into Mischief for the La Brea Stakes . . . There were 179 recorded workouts this morning, 52 on the training track . . . Sadler confirmed that both last year’s Santa Anita Derby winner Rock Your World and millionaire Grade I-winning sprinter Flagstaff have been retired, although the latter “might have a second act” and follow in the Hall of Fame hoofprints of Lava Man, now a barn pony who celebrates his 21st birthday New Year’s Day and is affectionately called “The Coach” by O’Neill and his staff. “Flagstaff is going to get a chance to be a pony since he’s a gelding (who will be eight on Jan. 1),” Sadler said. “We’ve turned him out for 90 or 100 days, then we’ll bring him back and see if he’ll adjust to being a nice pony. If that doesn’t work, he’ll just get a lovely retirement.”   Santa Anita will honor longtime Daily Racing Form National Correspondent Jay Privman by naming the third race, at 6 ½ furlongs down the hillside turf course, on Opening Day in his honor.  The National Museum of Racing and Hall of Fame recently announced that Privman will soon be inducted into the Joe Hirsch Media Honor Roll, which is reserved for those media members joining the Hall of Fame.