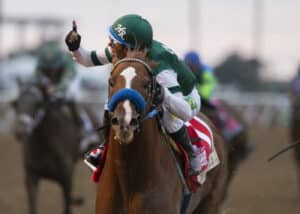 John Sadler hopes Tripoli returns to his winning ways when the four-old Kitten’s Joy colt runs in the Breeders’ Cup Classic at Del Mar on Nov. 6, but he realizes it’s a daunting task.

“He had his first work Monday in preparation for the $6 million Breeders’ Cup in 47 and four (47.40) and he’s going to work five furlongs on Sunday,” the trainer said of Tripoli.

“He just didn’t get the trip he needed (in the Awesome Again),” continued Sadler, who won the Breeders’ Cup Classic in 2018 with Accelerate. “He got hung out wide all the way, so it’s more about the trip for him, but he appears to have come out of it good, so it’s on to the Breeders’ Cup.

“The Classic is a great race, and it should be. That’s the big race and you’ve got a top three-year-old (Medina Spirit) and Knicks Go; it’s a really good race.”

The Distaff is one in the lucrative Golden State Series for California-bred or sired horses.

“This was a chance to get her back with Cal-breds and it seems like a good opportunity,” said Simon Callaghan, who trains the four-year-old Bayern filly for Kaleem Shah.

Leading jockey Flavien Prat rode her to a 4 ½-length victory in an overnight race at Del Mar last out on Aug. 29, but will be at Keeneland Saturday to ride 7-2 morning line second choice Shantisara for Chad Brown in the $500,000, Grade II Queen Elizabeth Challenge Cup at 1 1/8 miles on turf.

Callaghan has engaged resurgent Hall of Fame member Victor Espinoza to pilot Bella Vita, a consistent bay with a 3-5-1 record from 11 starts and earnings of $283,722. She also has two creditable efforts behind Grade I winners Gamine and Ce Ce.

Pulpit Rider has but three turf sprints on her 29-race resume, but Mike Puype feels the steady six-year-old Lucky Pulpit mare owned and bred by long-time proponents of California racing Mr. and Mrs. Larry Williams will fare well, coming off three straight grass races at a mile or longer.

She won the grassy mile Solana Beach twice by a nose, on Aug. 15, defeating Saturday’s 9-5 morning line Distaff favorite Warren’s Showtime, and again a year ago to the day, both at Del Mar. She made the first of three starts in the Solana Beach in 2019, finishing second by a neck as the 9-5 favorite.

“Six-and-a-half is not her best distance but it’s Cal-breds and we’ve got to take a chance, so we’ll see what happens,” the trainer said. “We’ll be trying.”

Her record attests to that, with seven wins, one second, five thirds and enviable earnings of $563,177, second only to morning line favorite Warren’s Showtime’s $715,431.

Flavien Prat rode her to victory last out, but since he rides at Keeneland Saturday, Drayden Van Dyke returns in the saddle.

“Dryden’s had success with her before, so that’s fine; we’ll be ready,” Puype said, alluding to Pulpit Rider’s first try in the Solana Beach when she finished second by a neck Aug. 9, 2019.

CHRB MEETINGS TO BE HELD NEXT WEEK

Consistent with Governor Gavin Newsom’s Executive Order N-29-20, these meetings will be teleconference only. No physical locations will be provided. The public may participate in either of two ways. The webcast audio link on the CHRB website will continue to provide a way for the public to listen to these meetings. Those wishing to speak during the meetings may dial 888-392-4564 and enter 6896291# to join the teleconference.

To speak on any item, press star 1 to enter the speakers’ queue. Those providing unsolicited public comment on individual agenda items are limited to two minutes. Comments must relate specifically to the agenda items. Note that for the Board agenda item #8 and the Committee agenda item #2, Public Comment, no further comments will be permitted after 30 minutes.

FINISH LINES: Trainer Michael McCarthy worked Breeders’ Cup candidates Ce Ce and Smooth Like Strait four furlongs this morning in the respective times of 47.80 and 47.40. In all there were 104 recorded works, 27 on the training track . . . Bob Baffert drew the first three post positions in today’s second race, a seven-furlong sprint for three-year-olds. Two are first-time starters, including Essential Wager, a son of Honor Code who shows seven bullet works among his 12 listed. Baffert’s other firster is Miacomet, a son of Flatter, while Vetoed, favored in each of his three starts, breaks from the two hole. Thales, a $1,250,000 son of Quality Road, makes his debut for owner Kaleem Shah and trainer Simon Callaghan and is Jon White‘s 3-1 morning line favorite in a field of eight . . . Trainer Mike Puype reports the popular turf stakes marathon specialist Ward ‘n Jerry is still doing well in his eight-year-old season. “We gave him a little break because of limited race selections,” the trainer said of the Lucky Pulpit gelding that won the Grade III San Luis Rey Stakes in 2020 for owners/breeders Mr. and Mrs. Larry Williams and was mythical Horse of the Year for the lucky players who singled him at 12-1 in a Nov. 6, 2016 Pick Six that paid roughly $132,000. “We’ll have him ready for the winter meet,” Puype said.