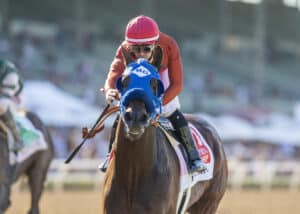 DR. SCHIVEL ‘ON THE MARK’ FOR RUNHAPPY MALIBU

Dr. Schivel had his final major breeze Monday for Sunday’s Grade I Runhappy Malibu Stakes, going a half-mile in 48.20 for Mark Glatt, who trains the son of Violence for Red Baron’s Barn LLC, Rancho Temescal LLC, William A. Branch and Reeves Thoroughbred Racing.

“Everything was good,” said Glatt, who has had Dr. Schivel (pronounced SHIV-el, not SHY-vel or Shi-VELL) for four races, winning three including the Grade I Bing Crosby on July 31 before incurring an excruciating nose defeat in the Breeders’ Cup Sprint at Del Mar last out on Nov. 6.

“Strategy will depend on a lot of different things,” said Glatt, who has engaged Juan Hernandez to ride in the Malibu.

Flavien Prat had ridden the bay colt in his last five races but opted to stay with undefeated favorite Flightline in the Malibu. Hernandez has ridden Dr. Schivel once previously, winning a maiden race by 5 ¾ lengths at Del Mar on Aug. 20 of last year. 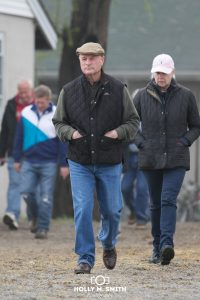 Missy P. makes her first start in more than six months and steps up into Grade I company in Sunday’s $300,000 La Brea Stakes for three-year-old fillies at seven furlongs.

The bay daughter of Into Mischief owned and bred by Spendthrift Farm LLC is trained by Richard Mandella.

“She just had a big work (Saturday, seven furlongs in 1:25), a real nice work, so we’re going to give it a go,” the Hall of Fame conditioner said. “Mike Smith will ride her.”

Missy P. last raced June 6 at Del Mar, lacking room in the stretch when finishing fifth by 6 ¼ lengths under Tyler Baze in the restricted Desert Code at six furlongs on turf.

Mandella also will “take a shot” with Ivy Leaguer in Sunday’s Grade I American Oaks at 1 ¼ miles on turf.

“I’ll be an outsider but she’s doing really well and she’ll like a mile and a quarter,” he said.

The great Beholder, who won Eclipse Awards at ages two, three, five and six and retired with career earnings of $6.1 million, will be represented on Opening Day by her first foal to race–Q B One, a 3-year-old old colt by Uncle Mo.   Like his dam, Q B One is conditioned by Richard Mandella, and he’s owned by his breeder, Spendthrift Farm.

Foaled in Kentucky on Jan. 30, 2018, the dark bay or brown colt drew post position four in a field of six going 6 ½ furlongs in Sunday’s fourth race.

“I’ve had him for a bit and he’s had some minor problems,” Mandella said, “so he was sent out and came back, but he’s doing well now.

“He trains good and I think racing will make him better but I don’t know that his mind is really on it yet. We’ll get a race into him and I’d expect going short he’ll probably settle back and finish well, getting him started for better things down the road.”

Beholder, it’s worth noting, ran fourth in her debut race before becoming the first horse since 1976 to win a Grade I race at age two, three, four and five, and being one of only two horses to ever win three Breeders’ Cup races.

Asked if Q B One has shown any qualities that his brilliant mother displayed, without giving away any trade secrets, Mandella responded with a typical quip.

“He has a good appetite,” he said.

Available to those 21 and older, the Craft Beer and Cider Festival will include LA’s best food vendors and food trucks, both trackside and near Santa Anita’s Kingsbury Fountain on the west end of the Paddock Gardens,

Per the Los Angeles County Department of Public Health Mega Event Guidelines, fans 12 and older must provide proof of vaccination status prior to entering Santa Anita Park. Alternatively, fans can show proof of a negative test result (taken within 72 hours from date of event).

First post time for the 11-race opening day card will be 11 a.m. Santa Anita also offers live racing on Monday, Dec. 27, with first post for a nine race program at 12:00 p.m. Santa Anita will be idle for live racing Dec. 28 and 29 and reopen for a four-day racing week on Thursday, Dec. 30 through Sunday, Jan. 2.

FINISH LINES: A boon to the Racing Department as usual, Doug O’Neill has 11 horses entered on opening day. “If it’s not a personal high,” the trainer said, “it’s got to be right up there. The condition book had a lot races that fit our horses. They’re training well so we’ll see how it goes.” O’Neill had more starters–78–than any other trainer and led in victories with 21 at the brief Santa Anita meet that ended Oct. 31. . . There were only 32 recorded workouts Tuesday, including 10 by Bob Bafferttrainees, led by Santa Maria Stakes winner As Time Goes By who went four furlongs in 48.80 . . . At its teleconference meeting on Dec. 15, the California Horse Racing Board approved the license for the Los Angeles Turf Club to operate its race meet that starts Sunday, requiring it to take one week off during that period. That will be April 22 through April 29 when the track will be dark, along with an optional “flex week” depending on weather and other circumstances that might prompt a cessation of racing. The entire CHRB session can be viewed on its website, www.chrb.ca.gov under the webcast link.