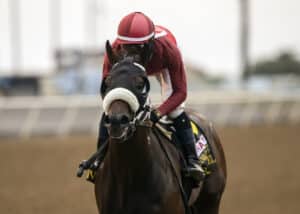 Loud Mouth, fresh and fit after being promoted to victory in the E. B. Johnston Stakes at Los Alamitos on Sept. 12, his first race in three months, returns to turf in Sunday’s $100,000 California Flag Handicap at about 6 ½ furlongs.

“He’s got plenty of speed for Abel (Cedillo) to come out of the gate and place the horse where he wants,” Knapp said. “The horse is doing very well right now. He had a three-month rest because he needed it. Now he’s starting to come around again.”

“Ron’s been with me for three or four years and we’ve done well together,” Knapp said. “He’s got nine horses with me now.”

Neptune’s Storm, a versatile son of prolific turf sire Stormy Atlantic, returns to a distance he fancies–one mile on grass–in next Saturday’s $70,000 Lure Stakes for three-year-olds and up.

The bay gelding is coming off an eventful ninth-place finish in the Grade II John Henry Turf Championship at a mile and a quarter, the longest route ever attempted in his 23 career starts.

“A mile is a better distance for him,” said trainer Peter Miller, alluding to the tractable campaigner’s record of five wins, one second and one third over that venue.

Leading rider Flavien Prat, who won the restricted Wickerr Stakes on Neptune’s Storm at a mile on Del Mar’s turf course July 18, will be back aboard.

“He’s a nice horse that tries hard,” said Miller, who has had Neptune’s Storm for his last four races, the gelding having previously been trained by Richard Baltas and earlier Bill Morey.

CHRB MEETINGS TO BE HELD THIS WEEK

Consistent with Governor Gavin Newsom’s Executive Order N-29-20, these meetings will be teleconference only. No physical locations will be provided. The public may participate in either of two ways. The webcast audio link on the CHRB website will continue to provide a way for the public to listen to these meetings. Those wishing to speak during the meetings may dial 888-392-4564 and enter 6896291# to join the teleconference.

To speak on any item, press star 1 to enter the speakers’ queue. Those providing unsolicited public comment on individual agenda items are limited to two minutes. Comments must relate specifically to the agenda items. Note that for the Board agenda item #8 and the Committee agenda item #2, Public Comment, no further comments will be permitted after 30 minutes.