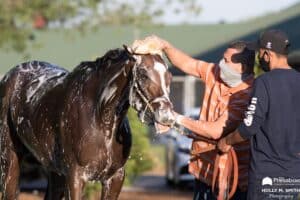 Hot Rod Charlie, who wore blinkers while finishing fourth in pursuit of victorious front-running favorite Knicks Go in the Breeders’ Cup Classic at Del Mar Nov. 6, will race without them in Sunday’s Grade II San Antonio Stakes, a major steppingstone to the Grade I Santa Anita Handicap on March 5.

“He was a bit erratic down the lane in two races before the Classic so we figured the blinkers on would be beneficial in the Breeders’ Cup, but we’re removing them for the San Antonio and I think we’ll know more after the race,” trainer Doug O’Neill said.

“His two races prior to the Breeders’ Cup Classic resulted in wins with the blinkers off,” continued O’Neill, referring to the Haskell at Monmouth July 17 and the Pennsylvania Derby at Parx Sept. 25, although he was disqualified to second in the Haskell.

A three-year-old son of Oxbow owned by Boat Racing LLC, Gainesway Stable, Roadrunner Racing and William Strauss, the $110,000 purchase has earned more than 20 times that amount with $2,471,200 despite winning only three of his12 career starts.

“He’s training well and we’re excited about opening day,” said O’Neill, who has a busy Sunday with 11 scheduled starters.

Going Global has made herself at home in the United States, specifically at Santa Anita, where the Irish-bred filly seeks her fifth victory in five starts Sunday in the Grade I American Oaks.

Favored in five of her seven races in America, four at Santa where she is unbeaten, Going Global will once again be the betting public’s cynosure in the field of 11.

Going Global is trained by Phil D’Amato, as is her countrymate, Burgoo Alley, who, while not as accomplished as her stablemate, is considerably better than the proverbial empty stall, having won the Grade III Autumn Miss on Oct.31.

At a mile and a quarter on turf, the American Oaks will be the longest distance of Going Global’s 11-race career, including four in her native Ireland.

“I think they’re a nice one-two punch for me,” D’Amato said. “I don’t see distance being an issue for either of them. Both have been keeping good company throughout the year, and this is our year-end goal, so hopefully they can run one-two.

“I’m happy with how both of them are training and we’ve been looking at this race for a while. They’re ready to go.”

“Both are on the cusp of running in stakes races, both are coming off allowance wins and are doing well, so we’re taking the next step up and see what they do.”

A daily list horses entered at major tracks throughout the country with available video workouts on XBTV is available from Xpressbet.com.  This unique service allows viewers to judge the quality of a horse’s workout for themselves as opposed to just reading about it from another source.  Did the horse work in company?  Did they gallop out?  Was it easy or were they hard pressed?  The XBTV team, which is based at Santa Anita and in South Florida, has been capturing the morning workouts around the country for the past few years.  In 2021, the group has recorded, edited and posted well over 14,000 video workouts to XBTV.com.

Available to those 21 and older, the Craft Beer and Cider Festival will include LA’s best food vendors and food trucks, both trackside and near Santa Anita’s Kingsbury Fountain on the west end of the Paddock Gardens,

In addition to the Grade I Runhappy Malibu Stakes, the Grade I American Oaks and the Grade I La Brea Stakes, the card is amply and ably supported by the San Antonio Stakes, the Santa Anita Mathis Mile and the San Gabriel Stakes, each a Grade II event.

Alternatively, fans can show proof of a negative test result (taken within 72 hours from date of event).

This year’s calendar features many never-before publicized archival photos of The Great Race Place dating back to its opening on Dec. 25, 1934.

From crowd shots to photos of legendary racing figures such as George Woolf, Gordon Glisson, Johnny Longden and Bill Shoemaker, the calendar also features racing and architectural photos depicting technological advances offered in a “compare and contrast” format each month.

After opening day, the wall calendar will be on sale in the track’s gift shop, Champions! Gifts & Apparel.

First post time for the 11-race opening day card will be 11 a.m. Santa Anita also offers live racing on Monday, Dec. 27, with first post for a nine race program at 12:00 p.m. Santa Anita will be idle for live racing Dec. 28 and 29 and reopen for a four-day racing week on Thursday, Dec. 30 through Sunday, Jan. 2.

FINISH LINES: There were 77 recorded workouts at Santa Anita Wednesday, including three by Bob Baffert stakes winners: Bob Hope winner Messier, three furlongs in 36.80; Santana Mile winner Ax Man, five furlongs in 1:01.80; and Los Alamitos Futurity winner Spielberg, five furlongs also in 1:01.80 . . . Hall of Fame champion Lava Man celebrates his 21st birthday on Jan. 1, still savoring his role as stable pony for Doug O’Neill. “He looks like he’s 11, he’s a happy horse, enjoying what he’s doing and a tremendous asset to us,” said O’Neill of Lava Man, affectionately called “The Coach” by the trainer and his competent staff…Speaking of the Hall of Fame, three retired HOF jockeys, Laffit Pincay, Jr., Donald Pierce and Darrell McHargue (currently serving as Chief Steward for the CHRB) will all be on-hand Opening Day and will be involved in several Winner’s Circle trophy presentations.