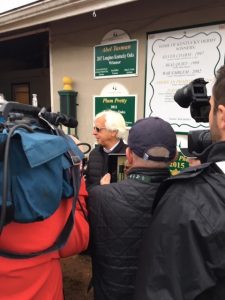 BAFFERT & MCPEEK BOTH SET TO RUN UNBEATENS IN BC JUVENILE FILLIES

Yesterday’s Preakness aside, Bob Baffert and Ken McPeek could lock horns again at Keeneland on Nov. 6 in what now looms the most anticipated Breeders’ Cup event that weekend, the Juvenile Fillies, in which two undefeated youngsters, heavyweights Simply Ravishing, trained by McPeek, and Princess Noor, conditioned by Baffert, are expected to battle.

The countdown is on; their legions await.

Trainer Phil D’Amato has four horses nominated to Saturday’s $100,000 California Distaff Handicap at 5 ½ furlongs on turf, but only Just Grazed Me is a likely starter in the popular Golden State Series, this for fillies and mares, three and up.

A five-year-old daughter of Grazen owned and bred by decades-long proponent of California racing Nick Alexander, Just Grazed Me would be making her first start since last May 25 when she was fifth in the Grade II Monrovia Stakes against open company.

“Just Grazed Me is a certainty; she’ll be ridden by (Umberto) Rispoli,” D’Amato said Sunday morning. “The other ones are possible.”

They would be Althea Gibson, Leggs Galore and Miss Megan.

“Just Grazed Me was running against some toughies at the end there and I’d run her a bunch, so I took her to Nick’s farm for a little freshener up in Santa Ynez and she’s come back really sharp,” D’Amato said.

Just Grazed Me’s preferred running style is to sit in mid-pack or beyond and pounce through the stretch. She won the California Distaff Handicap last year.

In a well-managed career of just 13 starts, she has gone off at odds of more than 9-2 only once, that being 16-1 in the Daisycutter at Del Mar in July of 2019. She has been favored six times, twice at odds-on.

“Nick and I have been together a good while,” D’Amato said. “We’re a good team.”

Private clocker and bloodstock agent Gary Young is looking to the future with a filly that has already been compared to the late, great Ruffian.

Her name is Princess Noor.

She is a $1,350,000 million purchase from the Ocala Breeders’ Sale who made seven figures look like bargain winning the Grade II Chandelier Stakes on Sept. 26 by 8 ¼ lengths under Victor Espinoza, giving Bob Baffert his record 12th win in the prestigious race.

A Kentucky-bred daughter of the up and coming stallion Not This Time, Princess Noor is owned by Saudi businessman Amr Zedan who campaigns as Zedan Racing.

“We bought her and I signed for her,” Young said of Princess Noor, unbeaten in three daylight victories and now headed to the Breeders’ Cup Juvenile Fillies at Keeneland on Nov. 6.

“The tracks are fast for workouts at the sales,” Young said, “but you could tell before she even got to the wire, she was going really fast, then they hung up 20 and a fifth for a quarter of a mile.

“Even at a two-year-old in training sale on a fast synthetic surface, you could tell she was rolling.

“First thing you wondered when you saw the time was had the board malfunctioned or had she really gone that fast . . . she galloped out another furlong really nice and didn’t lose her rhythm.

“Back at the barn she looked like she had just galloped instead of working that fast. and my veterinarian, Pug Hart, looked her over every way possible and said she was fine. She was terrific to look at.

“The bidding process was very arduous. A lot of the big players were in up to a million and more . . . I had Mr. Zedan on the phone (from the Middle East). It was more than we originally planned to spend but we hit it one more time at $1,350,000 and the people we were bidding against didn’t come back.

“When they said no, two things popped into your mind: ‘We got her, but now we’ve got to go make her justify what we paid for her.’

“Baffert was there and he had checked her out, gave her a thumbs up and she went straight to his barn from OBS. Soon thereafter she started breezing . . . we’d chat briefly after she’d work but we didn’t really need to discuss a whole lot.

“We usually ended the conversation with me saying to him or him saying to me, ‘We’re OK here,’ which was an understatement, meaning we’ve got something, and she’s never let us down yet.”