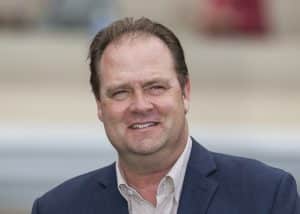 Trainer Doug O’Neill arguably has one of the most disparate stables in the country, ranging from world-class Grade I stakes winners to blue collar claimers, fillies, mares, colts, geldings, sprinters routers that run on dirt, turf, synthetic. They can do it all.

On Saturday, the two-time Kentucky Derby winner takes a baby step with two juveniles that are first and second morning line choices in the $100,000 Fasig-Tipton Futurity for two-year-olds at five furlongs, which he hopes for one could lead to the Run for the Roses on the first Saturday in May 2023.

That would be Tahoma, a chestnut son of 2018 Triple Crown king Justify, who will be joined in the Futurity by the filly Absolutely Zero, a chestnut daughter of 2018 Kentucky Derby winner Nyquist trained by O’Neill for principal client Paul Reddam Racing LLC, who also owns Absolutely Zero.

Both juveniles were comfortable first-out winners and no secret to bettors, who backed them down to odds-on favoritism.

As to running against males rather than her own sex, long-time O’Neill assistant Leandro Mora explained that the trainer and Reddam put their heads together and made the decision.

“I don’t have the exact answer, but I know Paul thinks big and likes to go big,” Mora said. “If he thinks the filly is good enough to beat the colts, that’s why he put her in the race.”

“Hopefully, they’ll run the way they can and hopefully we’ll keep going.”

How good is Tom’s Regret? Time will tell, but the two-year-old California-bred daughter of Tom’s Tribute has been no secret so far, winning her debut race at Santa Anita by 11 ½ lengths as the 1-2 favorite on April 15, then shipping cross-country to Churchill Downs and winning the Kentucky Juvenile versus males by a length as the 2-1 choice.

Next up: Saturday’s $100,000 Fasig-Tipton Debutante for two-year-old fillies at five furlongs.

“She’s doing great, been working good, doing as well as she was before both her victories,” trainer Jorge Periban said. “She’s doing everything right, nothing wrong.”

The bay filly has led almost from start to finish in both wins under Tyler Baze, who retains the mount Saturday. Periban adheres to the winning philosophy, if it ain’t broke, don’t fix it.

“We don’t plan to change strategy,” he said. “We have a better post Saturday (five of seven) than we did in Kentucky (drawing the rail in a field of 12, holding firmly to win by a length).

“We got lucky, and that’s what counts.”

Trainer Sean McCarthy hopes to capitalize on two diverse strategies with Private Mission and Varda in Saturday’s Grade II, $200,000 Santa Maria Stakes for fillies and mares three and up at a mile and one-sixteenth.

Varda, a four-year-old daughter of Distorted Humor, has run in four consecutive route races at a mile or longer, and was third experiencing an eventful trip in the Grade II Santa Margarita at 1 1/8 miles on April 30. As a two-year-old in 2020, she won the Grade I Starlet going 1 1/16 miles at Los Alamitos.

Both fillies are owned by the Baoma Corporation, nom de course of Charles Chu, who got into racing following his wife Susan’s early success. His first horse, Drefong, won the 2016 Breeders’ Cup Sprint at Santa Anita.

Peter Eurton sends out longshot Dean Martini in Sunday’s Grade III San Juan Capistrano Stakes at a mile and three-quarters over the hillside turf, but the 64-year-old trainer has warm memories of the marathon event, especially of the trainer who won the race a remarkable 14 times, Charlie Whittingham.

But first things first, and that would be Dean Martini, Eurton’s entry in the San Juan that had an eventful trip last out, finishing sixth, beaten only five lengths, in a race named for the “Bald Eagle,” the Grade II Charles Whittingham Stakes on April 30.

“He got shuffled back in that race a little bit,” Eurton said. “I think he’s more of a stayer, not a quick horse. He was further back than he needed to be, but we were otherwise pleased. His numbers were pretty good (an 89 Beyer).

“A mile and three-quarters is going to be a test, but he does seem to be a stayer, so we’ll see what happens.”

Eurton won the Whittingham twice with Ashleyluvssugar, in 2015 and 2017, and his memories of the Bald Eagle are fond, not fictive.

“Charlie was one of my idols growing up,” Eurton said. “I remember when I was 16 years old and I jumped the fence at Hollywood Park, snuck into his barn and was feeding (stakes winners) Cougar II and Quack.

“Him and Bill (Shoemaker) got together so many times on so many horses. I was in high school and I’d open the Herald-Examiner to check how many races they won together.

“It was a great time. Racing was amazing then in California.

Vanzy, a five-year-old full horse with six wins from 19 career starts at 12 different race tracks, seeks his first graded stakes victory in Sunday’s Grade III American Stakes for three-year-olds and up at a mile on turf.

“This will be his first run for me,” trainer Dan Blacker pointed out. “He was with Richard Baltas previously, but he came into me in really good shape. Richie did a great job with him, obviously, and the horse has trained well.

“We gave him a little more time from his last race (second by a half-length in the Grade III San Francisco Mile at Golden Gate Fields April 30) coming into this one, and he’s trained really well.

“His last two works have been very strong (including a bullet four furlongs in 47.60 May 28), so I feel confident he’s going to run a big race.”

FINISH LINES: Louisiana State Racing Commissioner and retired Hall of Fame jockey Eddie Delahoussaye was a stable area visitor this morning.  “Eddie D.” will present the trophy for Saturday’s Grade II Santa Maria Stakes, which has been carded as race seven…There were 81 recorded workouts Friday, including a five-furlong training track move in 1:02 by multiple stakes winner Becca Taylor, victorious in eight of nine starts for owner/breeder Nick Alexander . . . Miracle horse Catemaco worked four furlongs Thursday in 48.20 for trainer/breeder Kristin Mulhall . . . Toby Turrell, clocker and publisher of Winners Card, will be host Tom Quigley‘s seminar guest today, followed by Horseplayer David Nance Saturday, each day at 11:50 a.m. from the XBTV Studio . . . There have been 232 claims this meet resulting in payments of $6,199,000, the highest $100,000 for Rock the Belles, taken from Luis Mendez by Phil D’Amato…Condolences to the family of retired trainer Tim Arterburn, who passed away recently at age 62.  The son of former jockey and trainer Jack Arterburn, Tim was primarily based in Northern California, as was his father and brother, trainer Lonnie Arterburn, who bred Hall of Fame gelding Lava Man along with Kim Kuhlman.  Tim Arterburn’s sister Tami, is married to retired HOF jockey Russell Baze.