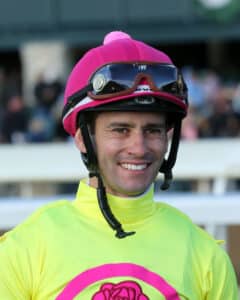 LEGEND IN THE MAKING’ PRAT HAS SIX-WIN DAY

Prat had mounts in all 10 races, delighting any place parlay players supporting him, as he was second in his other four rides.

The feat was no surprise to those who have watched the 29-year-old Frenchman ply his trade in earnest here since 2015.

Velazquez has registered his 10 victories from 22 mounts, a 45 percent winning average, with purse earnings of $743,850.

“What can you say?” pondered Doug O’Neill, who has given Prat a leg up on many a winner, including his three-year-old star of 2021, Hot Rod Charlie, scheduled to leave Jan. 17 for the $12 million World Cup on March 26 in Dubai, where he will have one prep race at Meydan Racecourse before the World Cup.

“Flavien is so good,” O’Neill said. “I’ve been around here since the 80’s with Shoemaker, McCarron and all the legends. Prat is still young with a big future.

“I think we’re looking at a legend in the making.”

AWAKE AT MIDNYTE STEPS UP IN GRADE II SANTA YNEZ

The chestnut filly bred by Forty Oaks and trained by O’Neill for principal client Reddam Racing LLC was ridden by Mario Gutierrez, who has been aboard in her only two starts, a maiden neck victory in her debut race last Oct. 31 at Santa Anita, and a second-place finish by a nose at 7-1 Nov. 27 in the Grade III Jimmy Durante Stakes on Del Mar’s turf course going a mile.

“She’s a nice filly, very honest,” said O’Neill. “She looked good in the breeze and if she’s OK tomorrow morning, we’ll be ready to rock and roll.”

O’Neill, understandably, has fond memories of Nyquist not only as a race horse but as a stallion. The son of Uncle Mo stands at Darley in Lexington, Ky., for $55,000 this year.

“Sprint, route, turf, dirt, the Nyquists do a lot of different things, and Awake At Midnyte has the pedigree (out of the Union Rags dam Midnight Union) to be good and we’re optimistic we can keep going up the ladder with her,” O’Neill said.

Thanks to donations from fans attending on Opening Day, the popular Mathis Plush Toy Horse, which was available for a $20 donation, generated $25,000 for the California Retirement Management Account (CARMA) and Thoroughbred aftercare.

In addition to the Plush Toy Horse, Opening Day fans also received a water bottle or a Mathis Mile Hat. With 100 percent of the proceeds going directly to CARMA, this event was a huge success and Mathis and Santa Anita Park have already committed to doing the same promotion next year.

“We’re thrilled to have raised $25,000 for CARMA, a non-profit organization that will ensure each racehorse has a bright future after racing,” said Bill Mathis, President of Mathis Brothers. “Together with the thousands of fans who participated on Santa Anita’s Opening Day, Mathis Brothers is proud to have helped put the horse first.”

“We can’t thank our fans and Mathis Brothers enough for their tremendous support of Thoroughbred aftercare,” said Newby.  “Each dollar raised from this promotion is going directly to CARMA to support the rehabilitation, retraining and retirement of California-raced Thoroughbreds.”

FINISH LINES: This morning, Breeders’ Cup Filly & Mare Sprint winner Ce Ce worked five furlongs in 1:00.20 for Michael McCarthy. In all, there were 249 recorded workouts Sunday, 70 on the training track . . . Santa Anita will be dark for live racing Monday through Thursday. Live racing resumes 12:30 p.m. Friday, Jan. 7.  The track will be open for simulcast wagering in the Grandstand Paddock Room on Thursday beginning at 10 a.m.

Sign Up
The Pressbox · 20 minutes ago
@thepressboxlts
May I please get 2 followers to COPY and re-post this tweet?