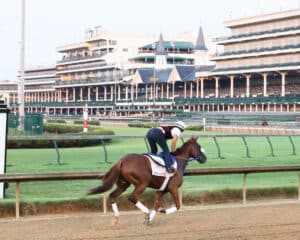 ‘SKYDIVER’ SHARP FOR GRADE I BEHOLDER

Owned by Peter Callahan and bred in Kentucky by WinStar Farm, the daughter of Daredevil upset Kentucky Derby winner and Horse of the Year Authentic at 11-1 in last year’s Preakness Stakes before an eventful seventh in the Breeders’ Cup Distaff at Keeneland last Nov. 7, her most recent race.

“There were limited options where we are,” trainer Ken McPeek said in explaining a coast-to-coast trip from Florida to start her campaign.

“There really wasn’t an older filly and mare stake in Florida and I’ve got my other filly, Envoutante, at Oaklawn (for Saturday’s Grade II Azeri Stakes). I didn’t want to run against each other.”

Envoutante, handy six-length winner of the Grade II Falls City at Churchill Downs in her most recent start last Nov. 26, also was nominated to the Beholder. Like Swiss Skydiver in the Beholder, Envoutante (“bewitching” in English) also drew the rail in the Azeri, where she is 5-2 on the morning line vs. four rivals.

“Obviously the Beholder is a great race and I think Swiss Skydiver is capable of running a flat mile,” McPeek said. “She’s really sharp now, so that’s good, and the timing works out well.”

Robby Albarado, who piloted Swiss Skydiver to her Preakness victory, arrived in California Tuesday to ride the chestnut filly in the Beholder, while McPeek got in town Thursday. Swiss Skydiver arrived Tuesday night.

With an Eclipse Award, two Grade I victories including the Alabama Stakes along with the Preakness, a four-length romp in the Santa Anita Oaks and five graded stakes wins on her resume last year, Swiss Skydiver exceeded McPeek’s expectations.

“In her first stakes race last year (fifth in a restricted outing at Tampa Bay Downs Jan. 18) she kind of had a troubled trip (going five-wide and floating out while beaten less than a length at seven furlongs), but since then she rolled on.

“It was unfortunate she stumbled (at the start) in the Breeders’ Cup (finishing seventh behind Older Dirt Female champion Monomoy Girl) and cut her leg up pretty good.

“But she bounced back from that. It was a magical season for the most part.

“Hopefully, we can come half that close this year.”

CISTRON BACK FOR THIRD TIME IN SAN SIMEON

Cistron, a durable bay son of The Factor, returns to run in Saturday’s Grade III San Simeon Stakes for the third straight year, a remarkable feat in its own right during a period when more limited campaigns seem the norm.

Even more remarkable, Cistron remains a full horse at the ripe old age of seven.

“He’s coming off a layup but he’s training well and we expect a good race from him,” said John Sadler, who conditions the Kentucky-bred for principal clients Kosta and Peter Hronis.

He won the San Simeon by a head last March 21 and was second by a length on March 31, 2019 in the race that will be run at six furlongs on turf Saturday. His previous two San Simeons came at 5 ½ furlongs and 6 ½ furlongs, both on turf.

“He just had some minor stuff going on which is why we gave him some time, but decided to bring him back for one more campaign,” Sadler said.

Phil D’Amato, in the thick of the trainers’ race with 18 wins from 78 starters, 23 percent, worked 16 horses Monday, nine on the training track, including two-time graded turf stakes winner Charmaine’s Mia who went four furlongs on the inner oval in a bullet 48.20 for the Grade II Royal Heroine Stakes on April 3.

The main track, an all-natural dirt surface installed in July 2011, is one mile in circumference. The training track is located inside the turf course and is about six furlongs in circumference.

D’Amato feels his grass runners have taken a fancy to the training track, so he sees no reason not to accommodate them.

“It’s kind of what I do,” D’Amato said. “I see a lot of other trainers starting to follow the trend. I think it’s just about horse preference.

“Some horses prefer the training track more than the main, so I try to put them on the surface they prefer and they’re most comfortable with.”

FINISH LINES: With 21 wins this meet Bob Baffert has moved ahead of Doug O’Neill by one in the race for leading trainer and with 893 in his career at Santa Anita (not including Oak Tree) is edging closer to Bobby Frankel‘s all-time record of 917 at The Great Race Place before this meet ends June 20. Baffert also leads all trainers this meet in purse earnings, $1,924,800 to runner-up Richard Baltas‘ $1,543,240. Baffert had nine workers Monday, three achieving bullet times albeit at different distances, the come-backing duo of Country Grammer and Justinian each going four furlongs in 46.80; Laurel River five furlongs handily from the gate in 58.60 and Bobby Bo six furlongs handily from the gate in 1:11.20 . . . George Herman Ruth, named in honor of baseball’s most famous player, “Babe” Ruth, makes his first start in just over a year and the third of his career in today’s fifth race. Now a gelding, the four-year-old gray son of Grazen trained by Phil D’Amato for owner/breeder Nick Alexander dwelt in his debut on Jan. 3, 2020, finishing 15 ¼ lengths behind a horse fittingly named Rookie Mistake. George Herman Ruth the horse returned a month later on Feb. 8 to win his second start by a half-length at 10-1 . . . Reminder: Daylight Saving Time begins Sunday. Turn your clocks ahead one hour Saturday night.