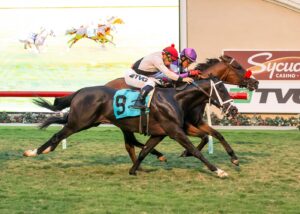 Whooping Jay, claimed by David Bernsen and Rockingham Ranch for $100,000 at Del Mar last Nov. 21, is nominated to both the $150,000 Donald Valpredo California Sprint at six furlongs and the $200,000 Unusual Heat Turf Classic presented by City National Bank this Saturday, but is likely to go in the Turf, according to his new trainer, George Papaprodromou.

Santa Anita will shine the spotlight on California-breds next Saturday with five lucrative stakes for horses bred in the Golden State offering purse money of $900,000.

“He’s been racing mostly on turf so it looks like we’ll run there,” Papaprodromou said of Whooping Jay. “We were looking for a claim at Del Mar and Gary Hartunian (of Rockingham Ranch) was instrumental in selecting this horse.”

A six-year-old gelded son of Square Eddie, Whooping Jay was last trained by Mark Glatt and prior to that Doug O’Neill.

Leggs Galore, winner of six of her 11 career starts including last year’s Sunshine Millions Filly & Mare Turf Sprint presented by John Deere by 3 ¼ lengths, returns to defend that victory next Saturday after a five-month vacation.

“We just gave her a nice freshening so we could campaign her through the New Year,” said Phil D’Amato, who trains the five-year-old gray daughter of Bayern for owner/breeder William Sims. “Her rest was well-deserved and she’s come back very good.”

Leggs Galore, whose forte is speed, has had 11 races, six last year, winning the Sunshine Millions Filly & Mare Sprint in her return on Jan. 16, 2021, later stretching out to a mile where she won the restricted Fran’s Valentine on May 9.

“She’s got one more breeze this weekend and she’ll be ready to go,” added D’Amato, who also will enter Alice Marble along with Leggs Galore.

A daughter of Grazen owned and bred by Nick Alexander, Alice Marble returned after a four-month layoff to win an overnight sprint at Los Alamitos on Dec. 9. She will be ridden by Flavien Prat, while regular rider Ricardo Gonzalez will be back aboard Leggs Galore.

D’Amato was undecided on running the eight-year-old gelding Acclimate in the Turf Classic, as he also is considering the Grade II San Marcos Stakes against open company Jan. 30 for the venerable speedster, winner of seven of 29 career starts with earnings of $683,872.

FINISH LINES: Another Baffert monster?  In her first two turn assignment, Adare Manorstreaked to a 12-length win going a flat mile in Friday’s eighth race, a $67,000 maiden special for 3-year-old fillies.  Owned by Michael Lund Petersen, the daughter of Uncle Mo stopped the clock at 1:36.66 with John Velazquez up…Trainer George Papaprodromou reports impressive come backing winner American Theorum is likely to make his next start in the Grade II San Pasqual Stakes at 1 1/8 miles on Feb. 5. The $200,000 race is a steppingstone to the Grade I Santa Anita Handicap at 1 ¼ miles on March 5. Previously idled with sore shins, American Theorum returned to the races on Jan. 2, the ridgling winning a 1 1/16 miles allowance race by 2 ¼ lengths under Mike Smith . . . Flavien Prat and John Velazquez are tied for Santa Anita’s riding lead with 14 wins each, Prat winning at a 33 percent clip and Velazquez 44 . . . A total of 108 horses drilled over the main track this morning, including Law Professor, a half mile in 47.40, Nicest, a half in 47.60, Brickyard Ride, five furlongs from the gate in one minute flat, Ce Ce, five furlongs in 1:00.60, Messier, five furlongs in 1:01.20 and Colt Fiction, six furlongs in 1:14.20… There will be holiday racing on Monday, Jan. 17, Martin Luther King Jr. Day, featuring the Grade III Astra Stakes for older fillies and mares at a mile and a half on the hillside turf cours

Sign Up
The Pressbox · 58 minutes ago
@thepressboxlts
May I please get 2 followers to COPY and re-post this tweet?