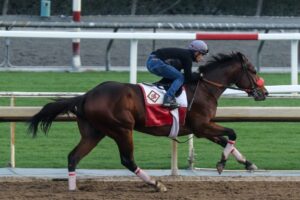 A lights-out winner of his last two starts, Jungle Racing LLC’s homebred Straight Up G appears a standout versus five sophomores going a mile and one sixteenth in Saturday’s $200,000 California Cup Derby at Santa Anita.

One of five California Cup Day races on a 10-race program, the Cal Cup Derby will be center stage as Straight Up G and his rivals attempt to follow in the footsteps of the Art Sherman-trained California Chrome, who used the 2014 Cal Cup Derby as a springboard to glory in the Santa Anita and Kentucky Derbies as well as the 2014 Preakness Stakes.

Like California Chrome, the Richard Baltas-trained Straight Up G, a bay colt by red hot sire Straight Fire, out of the Sky Mesa mare Gidget Girl, comes off a big win versus statebreds in the one mile King Glorious Stakes run at Los Alamitos on Dec. 12.

Owned and bred by sports talk icon Jim Rome and his wife Janet’s Jungle Racing, Straight Up G debuted as an even money favorite going 5 ½ furlongs here on Oct. 9, but finished a disappointing fourth.  Subsequently off at 4-5 in a six furlong maiden special versus Cal-breds on Nov. 21 at Del Mar, he aired by 5 ¼ lengths, earning a lofty 80 Beyer Speed Figure.

Off at 2-1 in the King Glorious, he led throughout in a thoroughly dominant performance, winning by 3 ½ lengths over Finneus, who he will again face on Saturday while earning a 75 Beyer.

With Ricky Gonzalez back to ride for a third consecutive time, Straight Up G appears  headed for the deep waters of the Kentucky Derby Trail should he replicate his performance in the King Glorious on Saturday.

A gutty half length winner of the seven furlong Golden State Juvenile at Del Mar Nov. 5, Finneus, a California-bred colt by Stay Thirsty, was off as the 9-5 favorite in the King Glorious, but he could never threaten Straight Up G, finishing second by 3 ½ lengths.  Well beaten three starts back in the Grade I American Pharoah Stakes here on Oct. 1, Finneus, who will be ridden for the first time by John Velazquez, will be trying two turns for the third time.  Devoid of early speed, his chances would be enhanced should there be a fast pace.

Bred by Terry Lovinger, trained by Walther Solis and owned by Lovingier, Mohammed Naseer Fasihuddin and Amanda Navarro, Finneus, who is out of the Ghostzapper mare My Fiona, is the leading money earner in the field with $266,366 from an overall mark of 7-2-3-1.

A sharp two length allowance winner going 5 ½ furlongs on synthetic Tapeta at Golden Gate Fields Dec. 31, the O. J. Jauregui-trained Highland Ghost will face statebred company and go two turns for the second time in what will be his eighth career start.  Quick from the blocks, this chestnut colt by 2017 Santa Anita Handicap winner Shaman Ghost could prove bothersome early to Straight Up G.

First post time for a 10-race card, which will include a total of five California-bred or sired stakes on California Cup Day, Saturday is at 12 noon.  Admission gates will open at 10 a.m.