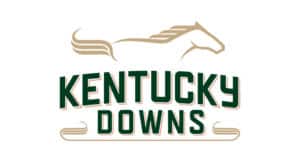 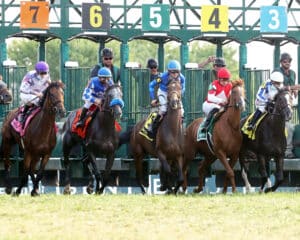 The right to breed a mare to 2017 Horse of the Year and record-breaking freshman sire Gun Runner sold for $130,000 — all going to relief and recovery efforts from last month’s tornado devastation in Western Kentucky — on Tuesday’s opening day of Keeneland’s January Horses of All Ages Sale.
Winchell Thoroughbreds and Three Chimneys Farm, the partnership that campaigned Gun Runner, offered the 2022 breeding season to benefit tornado recovery efforts. It was auctioned as Tuesday night’s last offering, with Keeneland forgoing its customary sales commission. The winning bidder was owner-breeder Bill Layni, who was not at Keeneland and was represented by an agent.
In addition, Three Chimneys and The Mint Gaming Hall at Kentucky Downs in Franklin are contributing an additional $50,000 apiece toward tornado recovery in the region. Ron Winchell, Kentucky Downs’ co-owner and co-managing partner with Marc Falcone, and Three Chimneys vice chair Doug Cauthen said they would like to distribute the funds among multiple entities in Bowling Green and elsewhere in the region after identifying areas and urgent needs that might otherwise get neglected.
The Mint Gaming Hall opened a satellite historical horse racing facility in Bowling Green in late December at 2475 Scottsville Road. While The Mint Bowling Green sustained little damage, other areas in Warren County were decimated by the historic weather system that ripped a 200-mile swath of destruction through the state. Seventeen of at least 77 storm-related deaths in Kentucky were in Bowling Green.
“Our hearts ache for the thousands of people impacted by the most violent tornados in Kentucky’s history and their horrific losses,” Winchell said. “We were blessed to have Gun Runner, a champion on the racetrack and now also in the breeding shed. Three Chimneys and I wanted our good fortune to help assist those whose worlds have been up-ended.
“Having a lot of team members in the Bowling Green area, we’ve heard a lot of first-hand stories about people who have lost loved ones or houses. It really hits home, the devastation and what people have lost, not only lives but their personal effects. It’s changed a lot of people in that immediate area. There are so many unfathomable needs right now. ”
Gun Runner stands at Three Chimneys in Midway, Ky., with a $125,000 stud fee for 2022, payable if the mating produces a live foal that stands and nurses. The auctioned breeding did not include that guarantee, making the $130,000 price even more impressive.
With the North American breeding season starting in mid-February, Gun Runner already is completely booked. So Tuesday’s auctioned breeding provided an opportunity to breed a mare this year to the wildly popular stallion.
Cauthen praised Keeneland for making the charity auction happen and promoting it on short notice.
“Everyone in Kentucky, at every level, wanted to do the right thing for folks that were hit by the disaster,” Cauthen said. “This, and another $50,000 from Kentucky Downs and $50,000 from Three Chimneys, will at least be a step in the right direction. The whole horse community has done a great job. The Torrealba family (Three Chimneys’ owners) and Ron Winchell just wanted to do their part, and it was a good way to do it with the sale being here and with no more Gun Runner seasons around. That was a great price and it will go to a great cause.”
Gun Runner’s 2-year-olds last year set a record for first-crop progeny earnings of $4,279,402; his six stakes-winning horses including Breeders’ Cup Juvenile Fillies heroine Echo Zulu and Saratoga’s Grade 1 Hopeful winner Gunite, Del Mar’s Grade 2 Best Pal winner Pappacap and Saratoga’s Grade 2 Adirondack winner Wicked Halo.
Trained by Hall of Famer Steve Asmussen, Gun Runner raced three seasons from 2015-2017, adding victory in the 2018 Pegasus World Cup (G1) then worth $16 million, before retiring to Three Chimneys. The horse won 12 of 19 races for earnings of $15,988,500, including the $6 million Breeders’ Cup Classic (G1) in 2017. He finished third in the 2016 Kentucky Derby, but only improved throughout the rest of his career.
Tony Lacy, Keeneland’s vice president for sales, called Gun Runner “an amazing stallion,” with bidders showing a lot of enthusiasm for the cause.
“I thought it was a wonderful gesture by Ron Winchell and Three Chimneys, going to an amazing cause,” Lacy said. “It’s great for the industry to be able to give back to this endeavor. One hundred percent is going to the victims. We were just happy to facilitate the process.”
2022-01-12T11:04:27-05:00By The Pressbox Staff|