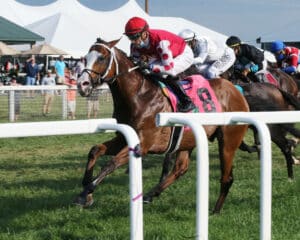 The long wait is over.  Idle since March of 2019, Santa Anita’s legendary Camino Real Hillside Turf Course will play host to an outstanding opening day field of nine three-year-olds and up competing at about six and a half furlongs in Friday’s G2, $200,000 Eddie D Stakes.  The Eddie D is one of four stakes on opening day of Santa Anita’s 16-day Autumn Meet which will conclude on Oct. 31.  Trainer Steve Asmussen’s Midwest invader Snapper Sinclair and Phil D’Amato’s locally based Gregorian Chant head what appears to be a very deep and diverse lineup.

One of the most popular races among fans and horsemen since December, 1953, the Camino Real hillside is a European style course with a panoramic start on Santa Anita’s northern perimeter, hard by Colorado Place, an iconic stretch of roadway that was a part of America’s original Route 66.

Once the horses are underway, they will negotiate a slight right-hand turn followed by a run “down the dip,” as Joe Hernandez, the original Voice of Santa Anita, used to describe horses as they ran down an undulating swale before emerging from behind a stand of trees en route to the quarter pole. From there, the field will cross the main track and then reunite with the “course proper” for what is often a thrilling stretch run.

Snapper Sinclair, a 6-year-old full horse by City Zip, comes off a three quarter length victory in a one-turn restricted stakes going a mile and 70 yards on turf at Kentucky Downs Sept. 8.  Owned by Bloom Racing Stables, LLC, Snapper Sinclair, who ran fourth in 2019 Breeders’ Cup Dirt Mile at Santa Anita, will be shipping in from his Churchill Downs base and be trying the Santa Anita turf for the first time and will be making his fifth start of the year.

Primarily campaigned at one mile on turf and dirt, Snapper Sinclair was a seven furlong turf stakes winner in his third career start on Sept. 6, 2017 at Churchill and he has not sprinted on turf or dirt since October 17, 2018 at Keeneland.  With two wins from four starts this year, he’s now banked $1,793,340 from an overall mark of 33-7-8-4.

Originally pegged as a long-fused turf runner, D’Amato’s Gregorian Chant found a new lease on life sprinting out of Santa Anita’s newly constructed turf chute this past winter.  A winner of three consecutive six furlong turf stakes, including the Grade III San Simeon four starts back on March 13, Gregorian Chant, a 5-year-old English-bred gelding, was too close to the early pace in Belmont Park’s Grade I Jaipur Stakes on June 5, finishing seventh, beaten 4 ¼ lengths at 5-1 going six furlongs over a turf that was listed as good.

D’Amato will also be represented by the talented multiple stakes winning mare Charmaine’s Mia, the lone distaffer in the field.  A three-time graded stakes winner at six furlongs and one mile (twice) over the Santa Anita lawn, she too will be trying the hillside course for the first time.  Owned by Agave Racing Stable, Medallion Racing and Rockin Robin Racing Stables, Charmaine’s Mia, who had been campaigned primarily at Woodbine Racecourse in Toronto, joined D’Amato’s stable late last year.

Idle since finishing sixth in the G2 Yellow Ribbon Handicap at a mile and one sixteenth at Del Mar Aug. 7, Charmaine’s Mia, a 5-year-old Kentucky-bred mare by The Factor, has not sprinted since winning her first start for D’Amato five starts back in the Grade III Las Cienegas Stakes at six furlongs on turf here on Jan. 9.

Although a bit long in tooth at age seven, trainer Mark Glatt’s Law Abidin Citizen, idle since a close fourth on dirt in the Grade I Bing Crosby Stakes July 31 at Del Mar, is fresh, dangerous and has the distinction of having won the last race down the hill–the Grade III San Simeon Stakes on March 31, 2019.  A winner of four of eight starts over the hillside turf, this Twirling Candy gelding will be making his fourth start of the year as Glatt eyes the Grade I Breeders’ Cup Turf Sprint in November.  Owned by Dan Agnew, Gerry Schneider and John Xitco, Law Abidin Citizen rates a huge chance on Friday.

Glen Hill Farm’s homebred Caribou Club, another 7-year-old gelding, has won two of his three starts down the hill, including his most recent, the Grade III Joe Hernandez Stakes on Jan. 1, 2019 when conditioned by Tom Proctor.  Idle since a close fourth in an ungraded stakes at 1 1/16 miles on turf July 17 at Gulfstream Park, Caribou Club will be making his fourth start of the year and his first for trainer Michael McCarthy.  Caribou Club will be reunited for the first since 2017 with Drayden Van Dyke, who at that time guided him to a pair of wins from four starts.

Originally run as the Morvich Handicap in 1974, the Eddie D was renamed in 2012 to honor legendary retired Hall of Fame jockey Eddie Delahoussaye.

First post time for a nine-race program on Friday is at 1 p.m.  For additional information, please visit Santaanita.com or call (626) 574-RACE.