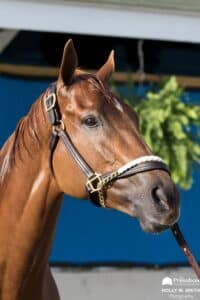 “The Pressbox” has learned that the grand Monomoy Girl — a champion filly and mare of both 2018 and 2020 — has been retired, according to a source very close to the situation.

The 6-year-old daughter of Tapizar, who rose to glory under the expert tutelage of trainer Brad Cox, apparently exited a regular training regiment with lameness on Tuesday morning.

According to sources, diagnostics were run and completed on the mare and it was discovered that she had sustained a non-displaced fracture of the sesamoid bone in her right foreleg.

It was decided — immediately — to retire the two-time Eclipse Award winner, who had 7 Grade 1 victories on her impressive resume — including a win in the prestigious Kentucky Oaks.

According to sources, the mare will be sent home to Spendthrift Farm in the near future and a plan to make her a broodmare will be developed. Surgery is not expected.

Over her career, Monomoy Girl won the G3 Bayakoa Stakes in 2021 before running 2nd to the grand Letruska in the G1 Apple Blossom on April 17. That would be her last race.

She won the Breeders’ Cup Distaff in 2020 at Keeneland, and also added the G1 La Troienne; the G1 Ruffian and an allowance that year.

Before missing all of 2019, she won the Breeders’ Cup Distaff at Churchill Downs in 2018, after being DQ’d in the G1 Cotillion Stakes at Parx. In addition, she won the G1 Coaching Club American Oaks; the G1 Acorn Stakes, the G1 KY Oaks and the G1 Ashland Stakes in 2018.

In 2017, Monomoy Girl won the Rags to Riches Stakes and was 2nd in the G2 Golden Rod.

“The Pressbox” has reached out to Cox to follow-up on the story. More to come.