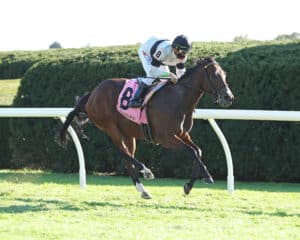 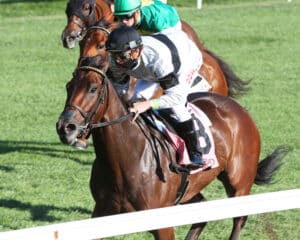 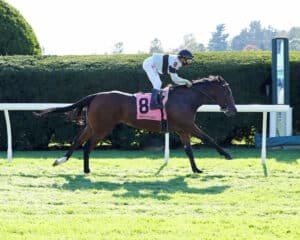 Wayne Lyster III, Gray Lyster and Bryan Lyster’s Spicy Marg shot to the front at the start and never was headed in winning Thursday’s featured $86,000 Whisper Hill Purse for fillies and mares by 1¾ lengths over Amusing Antics. (Click here for a replay of the race.)

Trained by Wesley Ward and ridden by Tyler Gaffalione, Spicy Marg covered the 5½ furlongs on a turf course labeled as good in 1:02.80. It was the third victory of the afternoon for Gaffalione, who for the fourth time in the first 10 days of the Fall Meet has ridden three or more winners on a single program.

Racing continues Friday with a 10-race program beginning at 1 p.m. ET. The afternoon’s featured race is the $150,000 Sycamore (G3) for turf marathoners going 1½ miles. The Sycamore is the eighth race with a 4:44 p.m. post time.