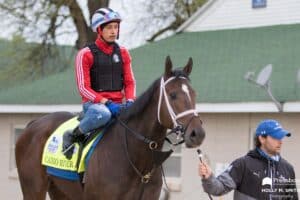 It was likely the final day of training for all of the participants in Saturday’s $750,000 Stephen Foster (Grade II). All seven contenders took to the Churchill Downs track to gallop Friday morning.

Juddmonte’s Mandaloun, the 2-1 morning line Foster favorite, had a strong 1 ½-mile gallop around 7 a.m. The 2021 Kentucky Derby (GI) winner was ridden by regular exercise rider Edvin Vargas. As the Into Mischief colt galloped past the wire, Vargas had his hands full as Mandaloun appeared to want to chase a fellow galloper about 10 lengths in front of him.

“We couldn’t be more pleased with his training into this race,” trainer Brad Cox said. “He’s really done well in his lead up to the Foster at home here at Churchill. He’s worked several times after the Saudi Cup and I think he’ll be on a much preferred surface Saturday.”

Cox also trained Shortleaf Stable’s five-time winner Caddo River in the same set at Mandaloun. Caddo River galloped 1 ½ miles and was installed as the second longest priced horse in the 1 1/8-mile race at odds of 10-1.

Grandview Equine, Cheyenne Stable, and LNJ Foxwoods’ multiple Grade II winner Olympiad was on the track early Friday. The son of Speightstown has trained for three days over the surface under the watchful eye of trainer Bill Mott’s longtime assistant Kenny McCarthy. Mott has won 751 races at Churchill Downs and one of them was the Stephen Foster when Ron the Greek scored a 9-1 upset victory over eventual Hall of Famer Wise Dan in the 2012 edition.

Godolphin’s multiple graded stakes-placed colt Proxy schooled in the Churchill Downs paddock Thursday and has been galloping over the main track for the past several days. Trainer Mike Stidham’s chief assistant T.C. Stuckey has been stationed at Churchill Downs with the 4-year-old colt for about a week. Proxy finished second to Dynamic One in last month’s $200,000 Blame Stakes.

It’s been 35 years since Hall of Fame trainer D. Wayne Lukas won the Stephen Foster with Red Attack. He hopes his new trainee Last Samurai can break that streak. Owned by Willis Horton, Last Samurai made the short walk from trainer Dallas Stewart’s Barn 38 to Lukas’ Barn 44 a few weeks ago. Stewart previously campaigned Last Samurai to a 12-1 upset win in the $1 million Oaklawn Handicap (GII). He’ll be ridden in the Stephen Foster by 62-year-old jockey Jon Court.

“Anytime you have live mounts it’s a little easier to get going,” Court said. “I always try to keep myself both physically and mentally prepared to compete with some of the younger riders in the room.”

Here are the full fields for each of five stakes events from the rail out (with jockey, trainer and morning line odds):

The 1 1/8-mile Stephen Foster is a Breeders’ Cup “Win and You’re In” event toward the $6 million Classic held at Keeneland on Saturday, Nov. 5. The winner of the Stephen Foster will receive their entry fees paid to the Classic along with a travel stipend if they are located outside the state of Kentucky.

SUNDAY, MONDAY TO CLOSE SPRING MEET WITH QUINTET OF STAKES EVENTS – Sunday and Monday’s cards at Churchill Downs will close the Spring Meet and feature a combined quintet of stakes events led by graded stakes winners Cody’s Wish and Plainsman in Monday’s $175,000 Hanshin presented by the JRA.

Here are the complete fields from the rail out (with jockey, trainer and morning line odds) for all five stakes events Sunday-Monday.

Shapiro’s comments: “While the Stephen Foster looks extremely competitive between Mandaloun and Olympiad, I think there could be some other creative ways to go in that race and included Caddo River, who is in great form, and Americanrevolution who will attempt to rebound from a fourth-place finish in last month’s Blame Stakes. My key in the sequence is Super Quick in the $350,000 Fleur de Lis (GII). I think the Norm Casse-trained filly can have a pace advantage from the inside post and take the field gate-to-wire.”

Wagering is available on www.TwinSpires.com, the official wagering provider of Churchill Downs Incorporated and the Kentucky Derby.

Last year’s winner was Gunite, who ran second to High Oak in the Saratoga Special (GII) and won the $300,000 Hopeful (GI) in his subsequent start for Hall of Fame trainer Steve Asmussen. The previous year’s winner was Whiskey Double, who would finish second in the Bay Shore (GIII) and third in the Pat Day Mile (GII) for Asmussen. In 2019, the winner was the Eddie Kenneally-trained Scabbard, who’d go on to finish second in the Saratoga Special (GII) and Iroquois (GIII).

Fans will be able to meet those riders and more with an autograph session in the Plaza from 3-4:15 p.m. There also will be a silent auction in the second floor of the Clubhouse beginning at 11:45 a.m. Admission gates will open at 11:30 a.m. and first post is 12:45 p.m.

Guests can also purchase a ticket to the Jockeys & Jeans private event in the Triple Crown Room that includes a buffet lunch, autographed Jockeys & Jeans poster and a meet and greet with Hall of Fame jockeys and fallen riders. Tickets are $75 and can be purchased online athttps://www.ticketmaster.com/event/16005B5CAD1637A6?did=jockey.

Jockeys & Jeans was founded by a group of former jockeys who wanted to honor the courage of those who suffered catastrophic injuries on the racetrack. The event will host several riders who were permanently injured on the racetrack such as Gary Birzer, Stacy Burton, Jack Fires, Armando Rivera and Mike Straight.

Fans will get analysis each race day from host Joe Kristufek who will be joined alongside expert handicappers Kaitlin Free, James Scully, Scott Shapiro and Brandon Stauble.

STAKES BONANZA – Closing weekend at Churchill Downs will feature 10 stakes races cumulatively worth more than $2.5 million (five on Saturday totaling $1.66 million; two on Sunday at $320,000; and three on Monday worth $525,000).

FOSTER FIELD AT A GLANCE – Combined, the seven Stephen Foster entrants have won 35 of their 97 starts (36.1%), including 15 stakes events, and $6.7 million. Mandaloun (Kentucky Derby and Haskell) and Americanrevolution (Cigar Mile) are Grade I winners. Last Samurai (Oaklawn Handicap) and Olympiad(New Orleans Classic and Alysheba) are Grade II winners. Olympiad is ranked No. 5 on the NTRA Top Thoroughbred Poll behind Flightline, Country Grammer, Life Is Good and Jackie’s Warrior.

FOSTER WIN AND YOU’RE IN – The 41st running of the $750,000 Stephen Foster (Grade II) is part of the Breeders’ Cup “Win and You’re In” Challenge Series. The winner of the 1 1/8-mile race for 4-year-olds and up will earn a spot in the starting gate for the $6 million Longines Breeders’ Cup Classic (GI) at Keeneland Race Course on Saturday, Nov. 5. Also, the winner’s entry fees to the Classic will be paid and will receive a travel stipend if based outside the state of Kentucky. The Foster is the first domestic “Win and You’re In” prep race for the Classic, and has been a part of the “Win and You’re In” series since 2013. Four horses have won the Stephen Foster and the Breeders’ Cup Classic in the same year. Black Tie Affair (1991) and Awesome Again (1998) won both races at Churchill Downs. Saint Liam (2005) won his running of the Classic at Belmont Park. Gun Runner (2017) won his Classic at Del Mar. Additionally, Fort Larned won the Classic in 2012 at Santa Anita and returned to his home base to win the 2013 Stephen Foster.

FOSTER ON NBC – Saturday’s $750,000 Stephen Foster (Grade II) will be televised live nationally on NBC from 4-6 p.m. ET as part of the 2022 “Breeders’ Cup Challenge Series: Win and You’re In – presented by America’s Best Racing” television schedule. Saturday’s telecast is the second of nine live programs across NBC, CNBC and Peacock featuring 18 automatic qualifying races on the road to the 39th Breeders’ Cup World Championships, which will be held Nov. 4-5 at Keeneland Race Course. Other races to be televised on NBC include the $350,000 Fleur de Lis (GII) and $160,000 Kelly’s Landing Overnight Stakes (Listed).

ENGRAVED KENTUCKY DERBY 148 TROPHIES TO BE PRESENTED SATURDAY – The connections from Team Rich Strike – owner Rick Dawson, trainer Eric Reed, jockey Sonny Leon and breeder Calumet Farm – will be at Churchill Downs on Saturday to accept their newly-engraved Kentucky Derby 148 trophies for the colt’s come-from-behind upset victory in America’s greatest race on May 7. The ceremony in the Woodford Reserve Winner’s Circle is scheduled after Race 7, which has a post time of 3:55 p.m. Guests in attendance will be able to take pictures with Rich Strike’s engraved Kentucky Derby 148 trophies as they’ll be on display inside the Paddock Gate from 1-2:30 p.m.