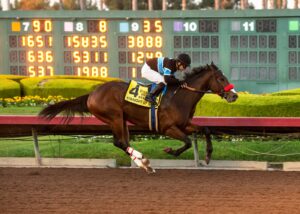 A stretch to two turns proved no problem for Straight Up G as the Straight Fire colt scored a decisive gate-to-wire victory in the $102,000 King Glorious Stakes Sunday, the final day of the Winter meet at Los Alamitos. 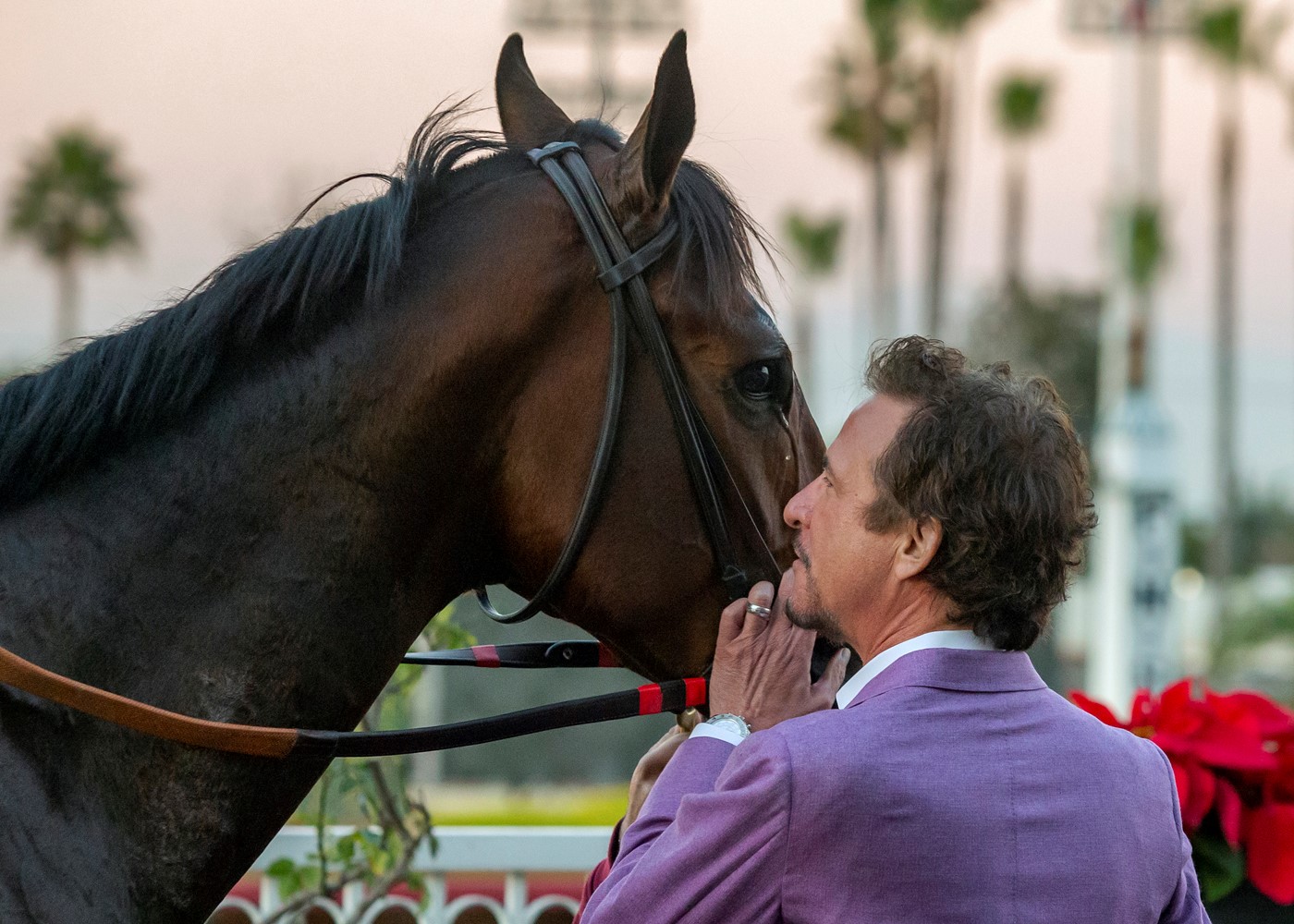 Under jockey Ricardo Gonzalez, Straight Up G, who is owned by breeder Jim Rome’s Jungle Racing LLC, easily dispatched of early challengers Moose Mitchell and Thirsty Always to draw clear in the stretch and ultimately prevail by 3 ½ lengths in the race for 2-year-olds bred or sired in California.

Trained by Richard Baltas, who also trains the colt’s half-sister Gidgetta, Straight Up G, who is out of the Sky Mesa mare Gidget Girl, completed the mile in 1:36.88 and returned $6, $4.20 and $3 as the 2-1 second choice in the field of nine. He’s now won twice in three races and earned $105,660. His King Glorious win came three weeks after he graduated by 5 ½ lengths going six furlongs at Del Mar.

“This horse has a lot of natural speed,’’ said Baltas. “I left it up to (Gonzalez). I told him just break well and go from there. He’s always worked really, really well. He’s a good horse and he’s got a good mind.’’

Gonzalez, who is now 2-for-2 on Straight Up G, said he very felt confident about how the race was going to turn out shortly after the start.

“He broke very sharp and when we got to the first turn he was moving his ears back and forth so I knew it was game over right there,’’ he said. “I knew it was going to be a stroll in the park.’’

Finneus, who defeated eventual Los Alamitos Futurity winner Slow Down Andy to win the Golden State Juvenile Nov. 5 at Del Mar, rallied for second as the 19-10 favorite. He paid $3 and $2.40 while finishing 1 ¾ lengths in front of 3-1 third choice Fast Draw Munnings. The show price on Fast Draw Munnings, who was a first out maiden winner Sept. 17 at Los Alamitos, was $3.20. 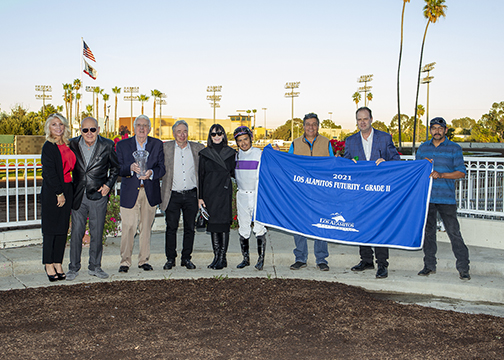 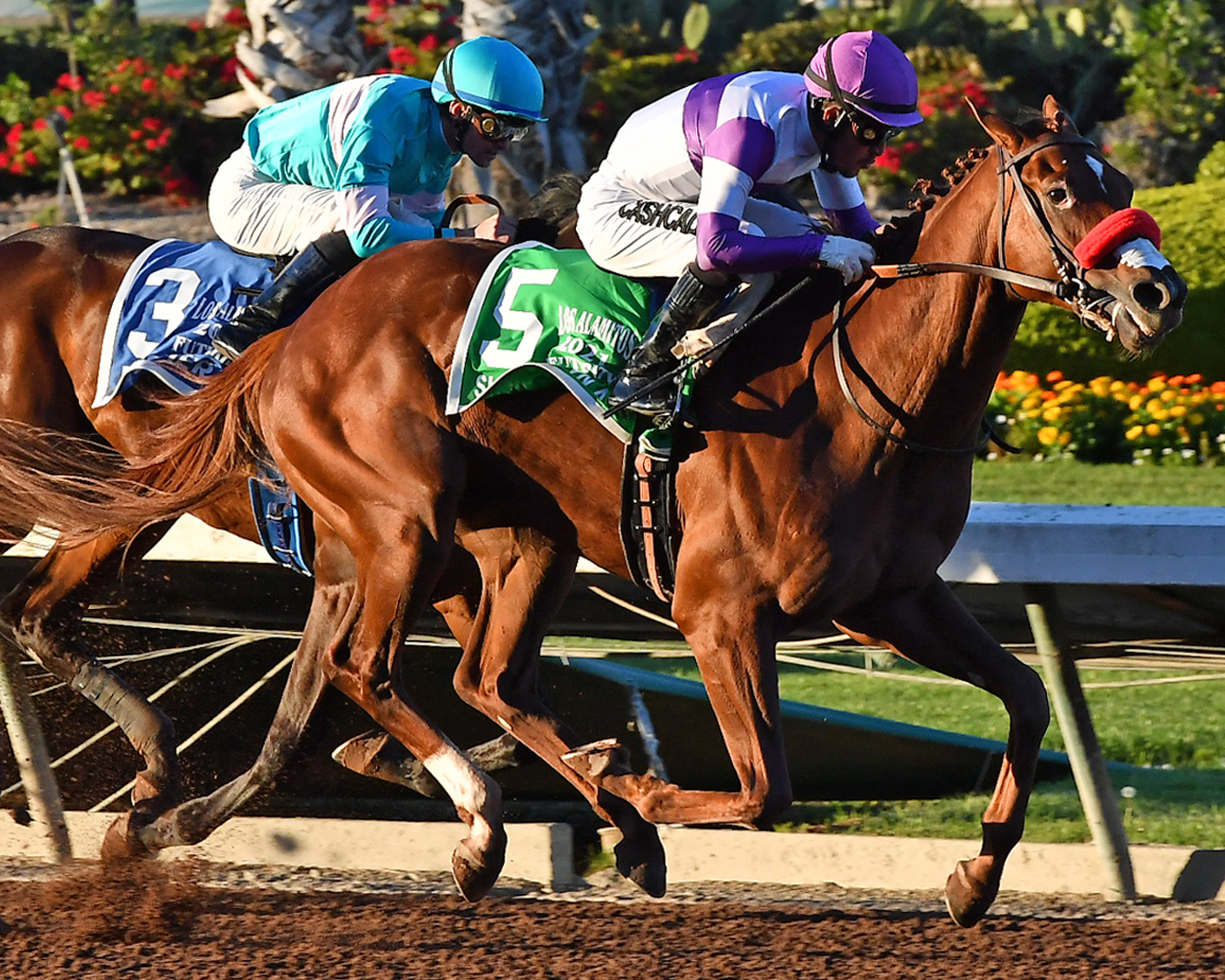 Rather than run in the $100,000 King Glorious Stakes Sunday, an ungraded event restricted to 2-year-olds bred or sired in California, Reddam wanted to try the Grade II, $300,000 Los Alamitos Futurity with his homebred Slow Down Andy.

Making his first start against open company and first beyond seven furlongs, the son of 2016 Kentucky Derby winner Nyquist was up to the challenge, upsetting heavily-favored Messier under jockey Mario Gutierrez.

Reserved off the pace set by longshot Olympic Legend and stablemate Durante, Slow Down Andy, who is trained by Doug O’Neill, took over the lead early in the stretch, surrendered it to Messier, the 1-2 choice, when he lugged in, but regained his momentum and went on to win by one length. He completed the 1 1/16 miles in 1:42.33.

Out of the Square Eddie mare Edwina E, Slow Down Andy ended Hall of Fame trainer Bob Baffert’s stranglehold on the Futurity. Baffert had won all seven of renewals at Los Alamitos since daytime thoroughbred racing returned in 2014.

The 5-1 third choice in the field of five, Slow Down Andy returned $12.40 and $3.40. There was no show wagering. Messier, who had won his two previous races by a combined 10 lengths, paid $2.10 while finishing nine lengths clear of stablemate Barossa. Durante and Olympic Legend completed the order of finish.

The victory was worth $180,000 and increased Slow Down Andy’s earnings to $249,850. He graduated first time out at 5 ½ furlongs Oct. 9 at Santa Anita before finishing second as the favorite in the Golden State Juvenile last month at Del Mar.

“He’s showed us from the beginning he’s a nice horse,’’ said Reddam. “I suggested we run in here. I think everybody thought I was nuts, but they didn’t have the nerve to say so.’’

O’Neill, who missed winning the 2020 Futurity by a nose with 33-1 shot The Great One, admitted he would have chosen the King Glorious for Slow Down Andy’s third career start rather than the Futurity.

“One hundred percent that’s what I would have done,’’ he said. “This was strictly Paul wanting to take a chance and having faith in Slow Down Andy and thank God he did.

“We figured (Durante, who finished fourth) would show speed and being in post five with Slow Down Andy we hoped (Gutierrez) would get good position and ride his race.

“Down the stretch it looked like we had it, then we didn’t and then we did, so it was very exciting.

“He doesn’t really remind me of Nyquist. This horse has a lot of different gears and Nyquist was just a beast, so precocious. This horse is pretty calm and more mentally versatile at this stage than Nyquist ever was.’’

Although Baffert failed to win the Futurity for the first time since fellow Hall of Famer Jerry Hollendorfer took the final running at Hollywood Park with Shared Belief in 2013, he did win three races Saturday at Los Alamitos. He took the fifth with Under the Stars, the seventh with Essential Wager and the eighth with first time starter Doppelganger.

Entering the final day of the Winter meet, Baffert tops the standings with five wins. Kyle Frey leads the riders with six, one more than Flavien Prat, who was aboard all of Baffert’s winners Saturday, Abel Cedillo, Diego Herrera, Tyler Baze and Ricardo Ramirez.

The main event is the day’s final race. The 2-1 morning line favorite in the King Glorious is Straight Up G, an impressive maiden winner Nov. 21 for owner-breeder Jim Rome’s Jungle Racing LLC and trainer Richard Baltas.