The Reason I Own a Racehorse? Our “Diamond” Is a Cut Above

The Reason I Own a Racehorse? Our “Diamond” Is a Cut Above 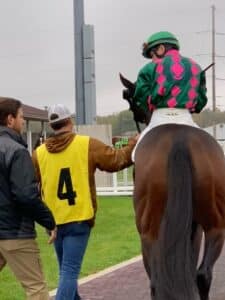 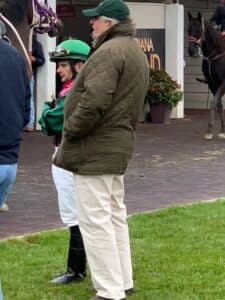 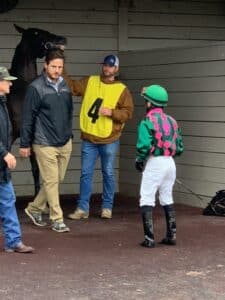 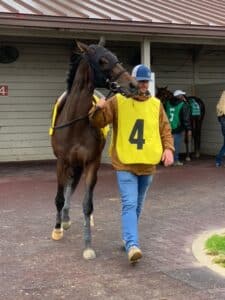 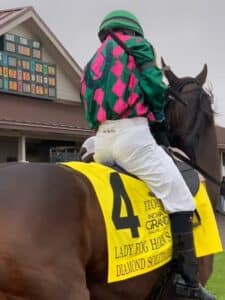 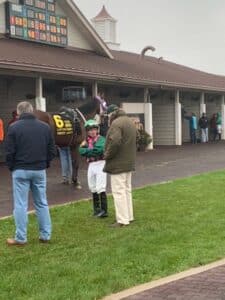 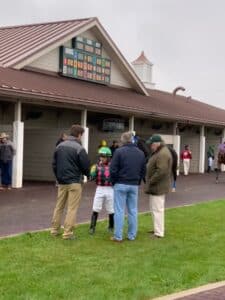 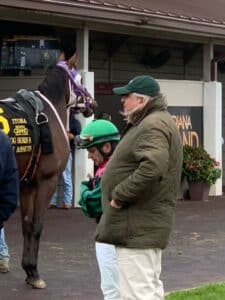 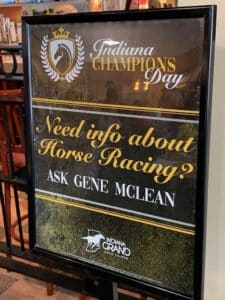 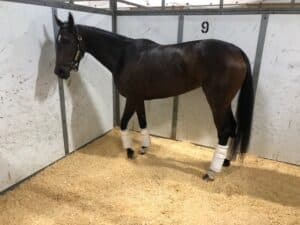 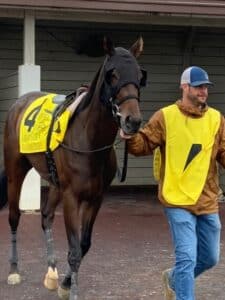 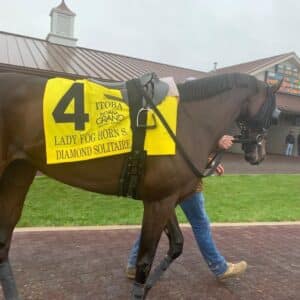 By the time our trainer, Stephen Lyster; one of my co-breeders, Lori Hebel-Osborne; and I got to her after the race, Diamond Solitaire was standing in a mud bath and batting her eyes faster than a bull frog in a hail storm.

The mud was caked all over her beautiful bay body, as if she had climbed out of a spa treatment.

The mud was dripping off her blinkers all the way to her tail, swishing in behind her like an overwhelmed set of wiper blades.

But, as she always does, Diamond stood still as a statue, and allowed her friends to hug her neck and kiss her forehead and, once again, tell her how well she had run; how strong she had finished; and how proud we were and always are of her — yet again.

Some of the mud transferred to my fleece, but I didn’t mind.

Some of the sticky dirt slid over my shoe tops and onto my pant legs, but it didn’t compromise my fashion statement.

Some of the mud and sand batter slipped onto my lips and into my mouth. But, really, I didn’t mind the aftertaste.

Some of the slime iced our cake, but, in the end, it was as if the sun was shining bright on our little Indiana-bred filly and our dreams of grandeur.

I was kind of glad that the mist was still spraying like a watering system for a Florida lawn. I was glad that the side-ways rain was hitting me in the face, like an early morning splash to open the eyes and prepare the face for a fresh shave. I was so glad that God’s holy water was hitting me square in the eye.

On Saturday, our 3YO filly, Diamond Solitaire, ran on Indiana Grand Racing & Casino “Champions Day” and in the featured event for the Thoroughbreds — the $150,000 Lady Fog Horn Stakes.

Our Saturday, our 3YO filly, Diamond Solitaire, ran her heart out, and despite facing more traffic than a New York taxi at quitting time, she rolled 8, 9, maybe even 10-horses wide into the stretch; and rallied strong to be second to the heavily favored and mucho-talented Fireball Baby in the biggest Stakes race of Diamond’s career.

On Saturday, Diamond Solitaire ran her soul out, giving us everything she had, and despite facing bigger odds than anyone else could imagine, she came with a closing rush that gave each of her owners an emotional rush to match.

On Saturday, Diamond Solitaire ran her best race ever, and, while not satisfied with the runner-up result, she stood there wearing the work on her brow and her efforts in her eyes, just waiting for us to come and say “Good job. Job well done. Job accomplished.”

As I told her how proud of her I truly was, and muttered the words she waited to hear the best I could choke, I just knew she was staring right back at us. Right back. Eye to eye. Heart to heart.

It was the connection that you wait a lifetime for, and when it comes? You just want it to last forever.

Such is our relationship with Diamond Solitaire.

We have known her since birth, and we have journeyed every life’s struggle together.

When her mom died just a week into her life, little Diamond and us figured out a way to go on with nurse mom, Geri ,and human mom, Lori.

When she suffered a broken leg on her way to the clinic with her stricken mom, little Diamond and us figured out a way to heal — both shin and soul.

When she faced obstacle after obstacle, we all figured out a way to go on; get better; grow stronger.

When she finally made the racetrack and the races, we figured out what she liked the best and where she raced the best.

When she faced her “sister” Pearl Tiara in gut-wrenching battle after battle — both at home at Deerfield Farm in Oldham County and on the racetrack — we all figured out a way to root for each and love them both. After all, they grew up in stalls next to each other and in fields they shared with each other from the first days of their youth to last winter’s holiday, too.

And, when Diamond was left alone to carry the banner for her co-breeders, the Osbornes — after the glorious and courageous Pearl sustained a life-ending injury and the dreadful aftermath of laminitis — it was Diamond who had to figure out how to mend a broken heart. Or two.

In her last race, just a couple of weeks ago, Diamond won an allowance race at Indy Grand. But the Osbornes were not there to watch, in person, as they normally are. They were on holiday in Ireland. They set the alarm and got up in the middle of the night to watch her win. Let the healing begin.

It was a day for fear and trepidation.

It was a day of both anticipation and hesitation.

I was hoping it would be a day for Diamond to help heal. Help heal my friend’s broken hearts.

Yet, without a doubt, it was an ambitious endeavor.

Diamond was facing older mares, who were coming off impressive performances and runs that most would appraised as better than anything we had ever accomplished before.

She was facing fillies and mares, whose respective resume’s included Stakes wins and impressive victories against open company.

Still, little did anyone know, when they loaded all the horses into the starting gate and I raised my head to the leaking skies above, I uttered a simple prayer to those with the big binoculars in the clouds:

“It’s in your hands now. I turn it all over to you. Just let her do her best, and please let her come home safe and sound to all of us. She’s all yours now. Please, Dear Lord, let the healing begin right here; right now.”

For most of the 11/16-mile race, Diamond Solitaire raced against really good horses; against time; against tall odds, and against a traffic jam that seemingly would never provide any relief.

When jockey John McKee steered her inside down the backside, it seemed as if Fireball Baby and her rider, Marcelino Pedroza, just in front of her, slid over to the inside, too. Opening blocked.

When McKee then maneauvered a bit to the outside, so, too, did Fireball Baby and Pedroza. Opening blocked.

When McKee waited for more chances, so, seemingly, did Fireball Baby and Pedroza.

Finally, on the final turn, McKee could wait no more. He found a slight glimpse of light to his right and asked Diamond for more.

She gave it to him and moved into the sunlight.

Finally, coming out of the final turn, and with no more time to wait, McKee decided to rally wide, and then wider, and then wider. He asked Diamond for more.

She gave it to him.

Deep in the stretch, with mud hanging from every hair and muscle, the two of them set aim for the leaders, and, most of all Fireball Baby, who had gotten through on the rail in a perfect ground-saving move.

McKee asked for more. Diamond gave him even more.

They went to 3rd, and then, after another horse drifted out to bump her again, they moved to 2nd.

They were not able to catch Fireball Baby. She was too far gone, and far too good.

But as our group of about 35 co-owners and friends stood on the rail, jumping and cheering in unison, Diamond seemed to respond to every request for more. Even past the finish line she kept going and going and going until she caught the winner in the first turn and passed Fireball Baby.

It was only then that Diamond slowed her gallop, and began to pull up.

It was only then that I allowed my eyes to drift over to my great, great, friend friends and co-breeders Lori and David Osborne. Lori was holding her hands to her face. David was holding his breath.

It was only then that I allowed my head to glimpse back towards the sky, and I offered up the only thing that I could give in return. And, I gave thanks. Like I had never giving thanks before. Like I plan to give on Thanksgiving Day later this month. Like I pledge to do more and more each day.

Just a few minutes later, I somehow found myself standing next to Diamond on that muddy track, with my arms wrapped around her muddy neck and kissing her muddy forehead.

And, as we stood there together, for just that one, quick moment in time, I knew exactly why I own a racehorse.

A racehorse who may have run 2nd, granted.

But, a racehorse who gave us all.

A racehorse who gave me chills, thrills.

A racehorse who gave her heart to save others.

And, a racehorse who helped heal broken hearts.

As the mud dripped from Diamond, the tears started to drop off my chin.

I knew right then and there why I was so very lucky to own this racehorse — a gift from God.

I knew right then and there why I will forever love this racehorse — my gift from God. 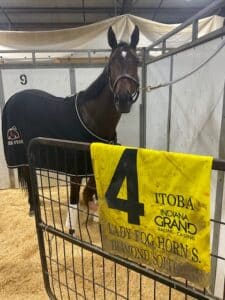