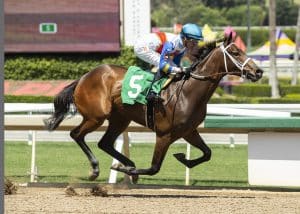 A California-bred filly by Tom’s Tribute, Tom’s Regret was sold for a bargain $20,000 as a yearling and has now amassed earnings of $141,105.  An 11 ½ lengths first-out maiden winner versus statebred fillies at odds of 1-2 going 4 ½ furlongs on April 15, she was subsequently off as the 2-1 favorite versus males in the ungraded Kentucky Juvenile going five furlongs at Churchill Downs May 5, a race she dominated early in and won by one length.

Owned by Griffin Stables, LLC, Saul Carillo, Victor Flores and Eugene Zondlo, Tom’s Regret is out of the Quality Road mare Pure.  With Tyler Baze back aboard, Tom’s Regret figures to be a short price at post time.

Owned and bred in California by Mr. and Mrs. Larry D. Williams, the Steve Specht-trained Rousing Jewel was most impressive in a three length first-out maiden win going 4 ½ furlongs on synthetic Tapeta at Golden Gate Fields May 7 as the 3-5 favorite.

By Rousing Sermon out of the Distorted Humor mare Ribbon of Jewels, Rousing Jewel, who had been ridden by Frank Alvardo in her debut, will be handled by Abel Cedillo on Saturday.

A California-bred daughter of 2015 Triple Crown winner American Pharoah, Terry Lovingier’s homebred E Z Pharis took on open company in her 4 ½ furlong debut, winning by 2 ½ lengths at odds of 2-1 under Tyler Baze, who has opted to stick with Tom’s Regret.  Trained by Walther Solis, E Z Pharis, who is based at San Luis Rey Downs, will be ridden by Kyle Frey.

Owned by Lovingier and Griffin Stables, LLC, E Z Pharis is out of the A.P. Indy mare Ez Indy.

Perhaps the biggest question mark in Saturday’s Debutante is John Sadler’s first time starter, Stone Silent.  A $410,000 Florida 2-year-old in training sale purchase, Stone Silent will no doubt garner plenty of pari-mutuel attention with Ramon Vazquez engaged to ride.  Stone Silent has three gate drills on her tab, her most recent a half mile in 48 flat here on Monday.

A Florida-bred filly by Adios Charlie out of the A.P. Jet mare Travelator, Stone Silent is owned by Talla Racing, LLC, West Point Thoroughbreds and Barker.

THE $100,000 FASIG-TIPTON DEBUTANTE WITH JOCKEYS & WEIGHTS IN POST POSITIN ORDER

First post time for a 12-race card on Saturday, the penultimate day of Santa Anita’s Winter/Spring Meet, is at 1 p.m.