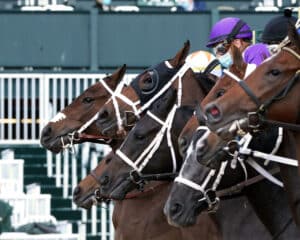 Trainer Graham Motion has won 33 stakes races at Keeneland, three of them coming in the Sycamore (G3).

Should Wertheimer and Frere’s Ziyad (GB) provide Motion with a fourth victory Thursday, it will be a totally different experience for the trainer.

“I have not personally seen him,” Motion said via text from his home base at the Fair Hill Training Center in Maryland. “He arrived Monday night from quarantine (in Chicago) and has trained there (at Keeneland) the past two mornings.”

A homebred son of Rock of Gibraltar (IRE), Ziyad has a Group 2 victory in France on his resume to go with five other group placings in Europe plus a close third in last year’s Pattison Canadian International (G1) at Woodbine.

“I certainly have seen his races,” said Motion, who won the Sycamore in 2014 and 2015 with Holiday Star and in 2011 with Sanagas (GER). “In normal times, I would imagine he would have run tomorrow for (trainer) Carlos (Laffon-Parais) but these are not normal times. It was complicated for him to send staff.”

Manny Franco will have the mount in the Sycamore on Ziyad, who will remain with Motion following the race that the trainer will view from afar.

“Afraid so,” Motion said. “Hopefully will make it for the Breeders’ Cup.”

Keeneland will host the Breeders’ Cup World Championships on Nov. 6-7.