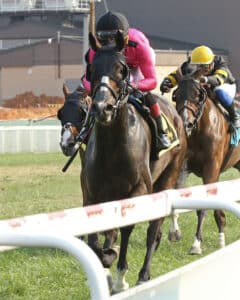 Already a multiple-stakes winner with more than $500,000 in earnings, Terry Hamilton and trainer Brian Lynch’s Tobys Heart will be on a quest to add a significant achievement to her resume in Sunday’s $100,000 Tropical Park Oaks.

Tobys Heart has won stakes at Saratoga, Belmont Park and Kentucky Downs but has yet to win a stakes around two turns. The daughter of Jack Milton’s quest for two-turn success doesn’t figure to be an easy one with the likes of undefeated Lady Speightspeare among the eight fillies entered in the Tropical Park Oaks.

“It would be nice seeing her win around two turns. We’ll keep our fingers crossed for Sunday,” Lynch said. “This is a good time, because it’s the last chance to win against her age group.”

Tobys Heart finished third at Saratoga in the Lake George (G3) and second in the Tepin at Churchill Downs, both at a mile. Back around one turn, the Kentucky-bred filly drew off by 2 ¾ lengths to win the $500,000 Music City Stakes at Kentucky Downs Sept. 12.

In her most recent outing, Tobys Heart finished fourth in the 1 1/16-mile Valley View (G3) over a yielding course at Keeneland.

“She was down on the inside and took the worst of it. I thought she ran really well. She got beat a neck for second and the winner loves the soft going and won well,” Lynch said.

Hall of Famer Javier Castellano, who was aboard at Saratoga, has the call.

Charles Fipke’s Lady Speightspeare looms as a short-priced favorite in the Tropical Park Oaks off victories her flawless record in four starts at Woodbine, including victories in the Natalma (G1) at a mile on turf and the Bessarabian at 1 1/16 miles on Tapeta.

Emma-Jayne Wilson, who has been aboard the home-bred daughter of Speightstown in all of her starts, has the return call.

Trainer Mark Casse will be represented by a pair of fillies, Live Oak Plantations’ Inthewinnerscircle and SBH Racing Inc.’s Mademoiselle Nova, who finished 1-2, respectively, in the 1 1/16 Cellars Shiraz over Gulfstream’s Tapeta course Nov. 5.

Luis Saez has the call on Inthewinnerscircle, also a stakes winner on turf. Edwin Gonzalez has the mount on Mademoiselle Nova, who won back-to-back optional claiming allowance victories on turf at Woodbine before losing by a neck to her stablemate in the Cellars Shiraz.

Fergus Galvin, R. A. Hill Stable, Black Type Thoroughbreds, John Arenson and Alan Lefevre’s Breaker of Chains, is set for her third start in the U.S. since being imported from Ireland. The Kentucky-bred daughter of Bernardini broke her maiden in her U.S. debut at Kentucky Downs before finishing sixth in the Valley View (G3) over a yielding Keeneland turf course.

Tyler Gaffalione has the return mount aboard the Jimmy Toner-trained filly.

R. A. Hill Stable and Brereton Jones’ Stunning Princess, who captured an optional claiming allowance Dec. 3 at Gulfstream; Dede McGehee’s Gladys, a full sister to 2009 Horse of the Year Rachel Alexandra; Fortune Racing LLC’s Bipartisanship, a British-bred filly who broke her maiden at Laurel two starts back; and Burning Daylight Farms Inc.’s Dream About Me, coming off a maiden score at Monmouth and an optional claiming allowance at Delaware Park; round out the field.