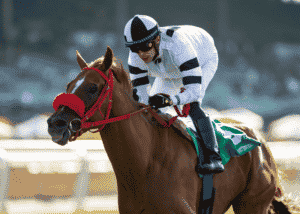 A part of the CTBA-sponsored Golden State Series, the California Distaff Handicap is for eligible fillies and mares bred or sired in California.

Owned and bred by Ben and Sally Warren, Warren’s Showtime is a two-time graded stakes winning daughter of top sire Clubhouse Ride and is out of the Warrens’ Grade I winning Affirmative mare Warren’s Veneda.

Never worse than third in six starts this year, all stakes, Warren’s Showtime rallied from off the pace to take the Grade III Wilshire Stakes at one mile on turf two starts back on June 20 and was most recently a close third versus statebreds as the even money favorite in the one mile turf Solana Beach Stakes at Del Mar Aug. 15.

Trained by Craig Lewis and easily the leading money earner in the field with $715,431 from an overall race record of 21-7-2-10, Warren’s Showtime, who will be shortening up out of five consecutive efforts at a mile on grass, will be trying the hillside turf for the first time with regular rider Juan Hernandez up.

Scratched out of the Grade III Chillingworth Stakes at six furlongs on the main track Oct. 3, Kaleem Shah’s 4-year-old Bella Vita, who was most recently a 4 ½ length winner of a first condition allowance going 6 ½ furlongs on dirt Aug. 29, broke her maiden sprinting on turf here in her second start, but will also be trying the hill for the first time.

A $400,000 2-year-old in training sale purchase in April, 2019, Bella Vita is by Shah’s 2014 Breeders’ Cup Classic winner Bayern and is out of the Storm Cat mare Queenie Cat. Trained by Simon Callaghan, Bella Vita will like employ a stalking style when ridden for the first time by Victor Espinoza. With an overall mark of 11-3-5-1, she has earnings of $283,722.

A 6-year-old mare by Lucky Pulpit out of the multiple stakes winning Lady Railrider, Pulpit Rider is owned by her breeders, Mr. and Mrs. Larry D. Williams and is trained by Mike Puype. A game nose winner versus statebreds of the one mile turf Solana Beach Stakes (in which Warren’s Showtime was third, beaten 1 ¾ lengths) Aug. 15, Pulpit Rider, who is winless in three tries down the hill dating back to January of 2018, is a four-time stakes winner who will be making her 30th career start.

First post time for a nine-race card on Saturday is at 1 p.m.  For additional information, please visit santaanita.com or call (626) 574-RACE.