What’s Wrong with Arrogate? Nothing That a Win in the BC Classic Can’t Cure

What’s Wrong with Arrogate? Nothing That a Win in the BC Classic Can’t Cure

It all started when he pulled a clunker in the San Diego Handicap about a month ago. The murmurs became a roar on Saturday night when he couldn’t get by his stablemate, the very talented Collected, in the Pacific Classic.

Now, today, there seems to be a rumbling around the racing world that would make a California earthquake tremble.

Word has it that Arrogate — winner of last year’s Travers Stakes, the Breeders’ Cup Classic and this year’s winner of the Pegasus World Cup and the Dubai World Cup (all in a row, mind you) — has finally stumbled from his perch and that the king of racing has been dethroned.

That the mantle and the baton must now be passed to Gun Runner, winner of the Stephen Foster and the Whitney Stakes in blowout fashion. Or, the title belt must now be given over to Collected. Or, his crown must now be doffed to another.

Well, that may be true.  But it will take beating him in the Breeders’ Cup Classic — which will be held on a track that the colt truly doesn’t prefer — to do it. Not until then will I be convinced that the big, athletic, grey colt — who has a crushing speed that makes others gasp for air and look for a reason to depart — is still not the best horse in training in the world.

OK. He lost the San Diego Handicap in a dull performance.  But it was his first out since returning from Dubai, which has already been demonstrated — for years — to be a draining experience.

OK. He lost the Pacific Classic. But it was not a dull performance, despite the cries of many that want something to go awry with this beautiful colt, who owns a magnificent stride. The likes of which the sport has not seen since the days of some of racing’s best — like Secretariat; like Spectacular Bid; like Affirmed and Alydar; like Ferdinand and Alysheba.

Turning for home, jockey Mike Smith got really busy.  But when he finally pulled him away from the dead rail, and the colt saw some clean air free of dirt debris, he pinned his ears and set dead aim for the leader and the finish line.  I really didn’t know, until that race, how short the stretch at Del Mar truly is. But despite a race that was free of any true, championship pace, the CHAMP made a run.

But we saw a glimpse of the “old” Arrogate. And, it just very well may be enough for the master of ceremonies, Bob Baffert, to pull another training miracle. Just in time for the first weekend in November.

I am not giving up on either Bob or Arrogate.  And, jockey Martin Garcia can say anything he wants about the fact that Connected is better than Arrogate.  He did win on Saturday.  The microphone is his. For the time being.

But there will be another day.  And, they had all better bring their “A Games” and running shoes in the Breeders’ Cup Classic.  My guess we will get to see Arrogate finally tame this Del Mar track, which he obviously doesn’t like too much. And, my guess we will get to pay praise to the Champ, once more. 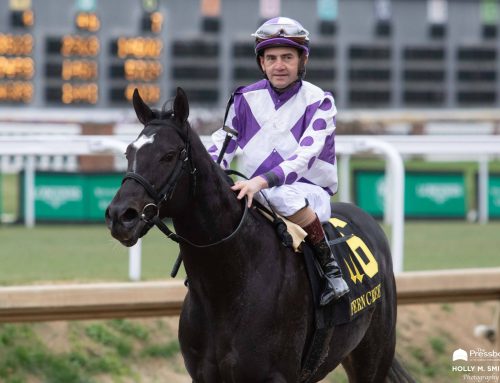 The Pressbox2 hours ago
New post added at The Pressbox - Pegasus World Cup News: Joseph Has 3 Starters in $3 Million Invitational

The Pressbox24 hours ago
New post added at The Pressbox - McLean's Selections for Turfway Park on Friday, Jan. 27