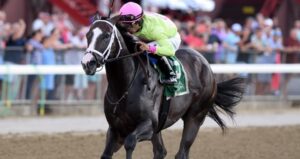 Michael Dubb, The Elkstone Group, Madaket Stables and Michael J. Caruso’s Grade 3 Bold Ruler Handicap winner Wondrwherecraigis is set to make his first start since making the grade when he takes on five other rivals in Sunday’s $100,000 Gravesend at Aqueduct Racetrack. A six-furlong sprint for 3-year-olds and up, the Gravesend will be the seventh start of the year for the 4-year-old gelding.

A son of Munnings, Wondrwherecraigis made steady progress towards graded stakes company, winning his first two starts at Laurel Park for trainer Brittany Russell en route to his stakes debut in the Gold Fever last year at Belmont Park. Finishing well to cross the wire in second in the Gold Fever, Wondrwherecraigis faced his first of two career disqualifications and was placed third by the stewards.

Fourth in the Grade 2 Amsterdam next out at Saratoga Race Course for his last start of 2020, the gelding regrouped in the allowance level for the first half of this year, going 2-for-3 in a trio of optional claimers.

Stepping back up to stakes company in August in Saratoga’s Tale of the Cat, Wondrwherecraigis was a convincing 2 ¾ length winner of the six-furlong sprint over multiple stakes winner My Boy Tate. Gaining the lead shortly after breaking in second, Wondrwherecraigis, with Luis Saez, up set a quick pace over the fast track, leading the field of six through a first quarter-mile in 22.68 seconds and a half-mile in 45.17.

Racing two-wide down the backstretch and then tucked into the inside path rounding the turn, Saez needed to keep busy on the dark bay, who drifted out to the center of the racetrack under right-handed urging. With open lengths between him and My Boy Tate, drifting was not a concern this time for Wondrwherecraigis and the gelding finished strongly to earn the first stakes win of his career.

Wondrwherecraigis’ drifting became an issue again in his next start when he came home first in the Grade 3 Frank J. De Francis Memorial Dash at Pimlico but was disqualified for interference with runner-up Jalen Journey.

“The DQ’s didn’t bother him at all. In the De Francis, he still thinks he won, so he was coming off a win in his mind,” Russell said with a laugh.

The dark bay continued his good form in his next start, finding redemption when he went wire-to-wire in the seven-furlong Grade 3 Bold Ruler at Belmont over a sloppy and sealed main track in his most recent start on October 31.

Russell said she is confident Wondrwherecraigis is effective at either sprint distance as he cuts back to six furlongs on Sunday.

“‘Craig’ has a lot of gas and he can be put wherever he needs to be in the race,” Russell said. “If he needs to sit off the pace, that’s fine too.”

Russell said Wondrwherecraigis has the versatility to handle a new surface as he prepares for his first start at Aqueduct.

“You don’t know about a new track until you try,” said Russell. “With winter surfaces, it’s always a question mark. But he’s a big strong horse and I don’t expect it to be an issue.”

With a high chance of rain forecast for Saturday into the evening, Russell said she is not concerned if the track still carries moisture on Sunday.

“‘Craig’ doesn’t care either way,” Russell said. “I do hope that it’s a good track but if it’s a wetter track, we aren’t going to worry.”

With a record of 6-1-1 from 10 starts, Wondrwherecraigis’ consistency has made him a standout in Russell’s barn.

“He’s a nice horse and we always thought he was,” Russell said. “We are taking it race by race and if there are brighter things in his future, fantastic. He keeps continuing to answer every question and that says a lot about his class. He’s a quality horse and a blessing to have around.”

Wondrwherecraigis breaks from post 5 with Saez in the irons again.

Trainer Rob Atras will send out Dubb’s seasoned gelding Chateau to try and claim his first victory since the Grade 3 Tom Fool at Aqueduct in March.

Geared down in the final strides of the Tom Fool to win by 3 ½-lengths, Chateau has two other graded placings this year when third in the Grade 3 Fall Highweight last time out at Aqueduct and second in the Grade 3 Runhappy at Belmont in May.

In the Fall Highweight, the 6-year-old Flat Out gelding set a fast pace on the lead per his usual style. After breaking third in the field of eight, Chateau was hurried to the front by Kendrick Carmouche to lead the pack through an opening quarter-mile in 22.51 seconds and a half-mile in 45.66.

Under a drive at the top of the stretch, Chateau put in a game run for the wire but was caught at the sixteenth pole by eventual winner Hopeful Treasure and a fast-closing Green Light Go. Chateau kept on well to hold onto third, beaten 3 ½ lengths at the finish.

“He ran a good race last time,” Atras said. “I’m hoping to move forward off that. He likes Aqueduct and he likes those tighter turns, he gets over the surface really well. All of his top races have been at Aqueduct it seems, so we’re hoping that he can do the same as he did last year.”

Chateau has won five of his eleven races at the Big A, including his lone graded stakes victory in the Tom Fool. He finished on the board in five of his other Aqueduct starts, his only off-the-board finish coming in the Grade 1 Carter this April where he came home a non-threatening fourth.

Hall of Fame trainer Steve Asmussen will send out West Point Thoroughbreds and Marvin Delfiner’s Jaxon Traveler to try and earn the fourth stakes victory of his career. A five-time winner and on the board in all of his 11 starts, Jaxon Traveler was last seen crossing the wire fourth but elevated to third in the Steel Valley Sprint on November 22 at Mahoning Valley Race Course.

Undefeated as a 2-year-old, he earned his first stakes victory in the Maryland Juvenile Futurity at Laurel Park. The 3-year-old Munnings colt has a pair of Grade 3 placings this year with a runner-up effort in the Chick Lang at Pimlico and a third in the Quick Call at Saratoga.

Jaxon Traveler will be searching for his first win since he took Pimlico’s Star De Naskra in August, an easy three length winner over Maryland bred/sired company in the short field of three runners. His other win this year came in the Bachelor at Oaklawn Park in April when he led at every point of call after breaking alertly and coasting home in a final time of 1:10.07 for the six furlongs.

Sign Up
The Pressbox · 43 minutes ago
@thepressboxlts
May I please get 2 followers to COPY and re-post this tweet?