World Series Winner Now a Winner at Churchill Downs, Too

World Series Winner Now a Winner at Churchill Downs, Too 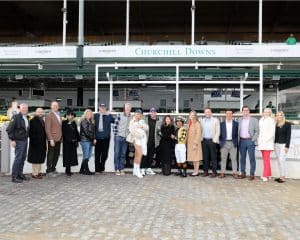 (Alex Bregman, of the Houston Astros, gets a win at Churchill Downs / Coady Photography)

Bregman was in attendance with his wife, Reagan, their three-month-old son, Knox, and several other family members for the victory.

“We’ve been at this for about a year and it’s the first time we’ve been able to watch one of our horses in person,” Bregman said. “We got in town about 45 minutes before the race and got over here just in time to check out Goldblooded in the paddock. Then, we got to watch the race with (trainer) Rusty (Arnold), my wife, son and in-laws.

“This is surreal to watch (Goldblooded) go on to win like that. In the World Series with two outs in the ninth inning you’re not as nervous as this. Being a player is just sort of what you do. Here you’re watching your horse run, freaking out, sweating and hearts beating. This is what it’s all about. This is my first time here at Churchill and it’s unbelievable.”

Goldblooded officially tallied a 3 ½-length victory with jockey Martin Garcia in the irons in the maiden $150,000 claiming event. Goldblooded earned $40,980 for her victory and awarded bettors with an $8.74 return. This was Goldblooded’s first start on the dirt. In her previous two starts the Goldencents filly finished eighth and third on the turf at Kentucky Downs and Horseshoe Indianapolis, respectively.

It’s been a good four weeks for Bregman after helping the Astros win their second World Series in the last six years. The 28-year-old is signed with the Astros through 2024.

“That’s always the hope to make to the World Series,” Bregman joked. “We’ve got a good group of guys to try and get back there.”

Coach finished fourth in this year’s $250,000 Bayakoa (GIII) and was forced to the sidelines for nearly eight months until her runner-up effort in the $100,000 Twixt Stakes at Laurel.

Jockey Ricardo Santana Jr. will have the riding assignment in the Chilukki and break from the rail. Santana was aboard Coach for her victory in the Pippin and an allowance contest on Dec. 17 at Oaklawn.

It will be cool day for racing Saturday in Louisville with temperatures expected to reach 36 degrees and sunny skies, according to the National Weather Service.

Wagering is available on www.twinspires.com, the official wagering provider of Churchill Downs Incorporated and the Kentucky Derby.

AROUND THE BACKSTRETCH – Leading jockey Tyler Gaffalione served a suspension Thursday for a whip violation. … Trainer Brad Cox had a special guest with him Thursday morning on the backstretch: two-time NBA Champion Rajon Rondo. The former University of Kentucky basketball great and Louisville native got a tour of Cox’s barn and watched several of his horses train. … Rigney Racing’s Grade III winner Played Hard worked a swift half-mile in :47.80 Thursday morning for her final tune-up prior to running in Thanksgiving Day’s $500,000 Falls City (GIII). … Valene Farms’ Breeders’ Cup Juvenile Fillies (GI) fourth-place finisher Sabra Tuff had her first work Thursday following that World Championship event and recorded a bullet half-mile in :47.60, the fastest of 59 horses to work the distance. … Gold Standard Racing Stable’s undefeated Hoosier Philly is targeting the $400,000 Golden Rod (GII) on the Nov. 26 Stars of Tomorrow II program. The Into Mischief filly cruised a half-mile in :48.20 early Thursday morning. … Hall of Fame trainerNick Zito moved his horses into Churchill Downs on Wednesday and is stabled in Barn 25.

DOWN THE STRETCH – The 20-cent Derby City 6 had a one-day carryover of $3,832 into racing Thursday. First post was 1 p.m. and the Derby City 6 spanned Races 5-10. … The season finale of “Inside Churchill Downs” will air Friday at 6 p.m. on ESPN 680/105.7. Those outside the Louisville region can listen to the one-hour broadcast on www.espnlouisville.com. … Pool 2 of the Kentucky Derby Future Wager along with the lone pool of the Kentucky Derby Sire Future Wager will run Nov. 24-27. The 40 betting interests for each pool will be released Monday. … Preparation is well underway for Thanksgiving Day at Churchill Downs where the team from Levy Restaurants is expected to serve more than 7,000 turkey dinners with all the fixings. Thanksgiving Day at Churchill Downs has been a Louisville tradition since 1969 where thousands of people are expected to attend the 12-race program that will have a special early post of 11 a.m. … For more information on the Churchill Downs Fall Meet, visit www.churchilldowns.com.