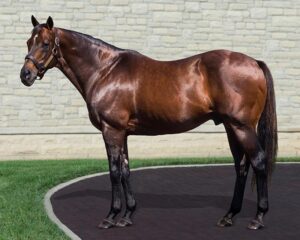 Awesome Again — winner of the G1 Breeders’ Cup Classic and over $4 million in purse earnings and the sire of 14 Grade 1 winners, including the great Ghostzapper — has passed away.

The son of Deputy Minister, who was just recently was shipped from his pensioned home at Adena Springs Farm to his retirement home at Old Friends, was being led into the barn last evening when Awesome Again apparently died from natural causes.

In a brilliant race career, Awesome Again went to the post a total of 12 times. He won 9 of them and was third on two more occasions. He earned $4,374,590 in purses.

Awesome Again’s top wins came in Queen’s Plate at Woodbine and the G2 Jim Dandy as a 3YO. At age 4, he won the G1 Breeders’ Cup Classic, the G1 Whitney Handicap, the G2 Stephen Foster, the G2 Saratoga Breeders’ Cup and the G3 Hawthorne Gold Cup.

Owned and raced by Frank Stronach, Awesome Again was retired from racing and went to stallion duty at the owner’s famed Adena Springs Farm in Kentucky for his stud duty. And, Awesome Again was, well, awesome in his second career, as well.

Throughout his retirement, Awesome Again was cared for and handled by Adena Spring’s long-time and highly-recognized Stallion Manager, Billy Drury.

Drury was Awesome Again’s his best friend and long-time handler. The two of them were never separated from the time he arrived at the farm following his race career until he was just recently transferred to Old Friends.