Breeders’ Cup Rankings Updated & “Thought of the Day:” Could Midnight Bourbon Be “The Sleeper”

Breeders’ Cup Rankings Updated & “Thought of the Day:” Could Midnight Bourbon Be “The Sleeper” 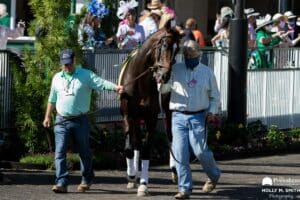 As we grow closer and closer to that magical first weekend in November and the Breeders’ Cup World Championships — which will be held in the beautiful scenery of Del Mar Turf Club for the 2nd time — we will be updating our rankings for each of the 11 title races.

(Check out the top of the Home Page at “The Pressbox” and click on the link. Our 2nd Draft has now been posted. Every week now, we will be updating as we progress to the 2nd and 3rd best days on the horse racing calendar each year.)

For the most part, we give you the “Top 5” in each category, but we may stray a bit and add a “sixth” man (or girl) if we feel like it and are prone to exaggerate. And, since it is “Our List,” we take that editorial privilege.

As one might expect and suspect, the leader of the classic “Classic” group is none other than the grand Essential Quality — who will try to win a race in the Breeders’ Cup for the 2nd straight year. Just a season ago, as a fledgling 2YO colt, the steel gray won the Breeders’ Cup Juvenile at Keeneland to solidify his clamp on the Eclipse and establish himself as the preeminent threat for the 2021 Kentucky Derby.

We all know what happened in this year’s Kentucky Derby — which resulted in EQ’s first and only career loss. But the colt has righted his ship and has since reeled off some impressive wins — including the G1 Travers Stakes — to once again give him some momentum heading into the Breeders’ Cup Classic.

But, without question, Essential Quality has all the right and “essential” “qualities” to win this year’s Classic as a 3YO. Speed. Stamina. Versatility. Class.

It will be interesting to see who develops into the major competition.

Will it be Hot Rod Charlie, who just won the G1 Pennsylvania Derby? He has speed. He has tenacity. And, despite his tendency to veer into competition in the stretch drive, he has lots of desire to finish what he starts.

Will it be Knicks Go, who is housed in the same barn and under the same roof as EQ? He has speed. Quality speed. Top end cruising speed. Amazing speed. And, now under the tutelage of Brad Cox, he seems to have the ability to carry it farther and make it last longer. He won the Breeders’ Cup Dirt Mile at KEE just a year ago. Can he make it two Breeders’ Cup wins in a row?

Could it be Max Player, who has suddenly turned into a semi-world beater over the last couple of races and since he was turned over to the expert care of Hall of Fame trainer Steve Asmussen? This guy won the G2 Suburban Stakes at Belmont Park just two starts ago in a sloppy mess of a racetrack. He came right back to prove that was no fluke with a power win in the G1 Jockey Club Gold Cup at Saratoga. Suddenly, he is New York’s best and that is the city so nice that they named it twice.

Will it be Midnight Bourbon. This 3YO son of Tiznow is another super talent being handled by Team Asmussen. And, it appears that the colt is on the verge — the very cusp — of turning super talent into super returns. And, just at the right time, mind you.

He was a near-miss 2nd to the fast-closing Rombauer in the G1 Preakness Stakes, after having put away the questionable winner of this year’s Kentucky Derby in Medina Spirit.

He was dropped to the ground in the G1 Haskell Stakes, after clipping heels with a stir-crazy Hot Rod Charlie in the stretch. I think we all can forgive that one. Right? Even the Twitter crazies?

He returned to run one helluva 2nd to Essential Quality in the G1 Travers Stakes at Saratoga. Nearly pulled that upset at a place known for upsets in races past.

And, he just ran 2nd again to drifting and wide Hot Rod Charlie in the G1 Pennsylvania Derby over the past weekend. Let’s just write that Asmussen was none too pleased with the ride of Flavien Prat on the winner and the opportunity of hitting the ground once more.

The colt has speed, but, seemingly, has learned to throttle and bottle it and use it when it is most advantageous.

The colt has guts. Has taken the blows. Has gotten off the mat. Has returned to throw a few punches of his own.

The cut is versatile. He can stalk. He can pounce. He can target. And, he can close.

And, this colt has taken his game on the road and done very well, too. Fair Grounds. Churchill Downs. New York.

The question, though, is can he win? Can he win the “Big Race?”

But I will tell you this. I am using this guy, along with EQ and Knicks Go.

He’s battle tested. He’s a been a bit bruised. And, I think, he just may be right to deliver a knock out blow. Of major proportions.

That’s our Breeders’ Cup “Thought of the Day.”