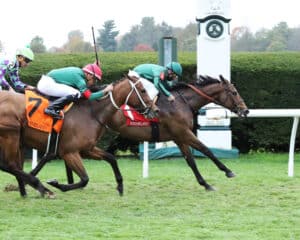 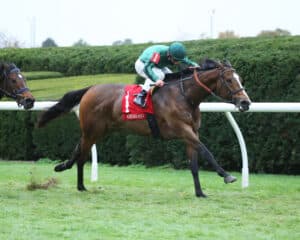 Castleton Lyons’ Brooke Marie took the lead out of the starting gate and held off a late challenge from Honey I’m Good to win the $93,000 Woods Edge Purse allowance for fillies and mares, 3-year-olds and up, Thursday afternoon. (Click here for a video of the race.)

Trained by Eddie Kenneally and ridden by Adam Beschizza, Brooke Marie won the race by a half-length and covered 5½ furlongs on a turf course labeled as good in 1:03.69.

The victory came in the first start for Brooke Marie, a 5-year-old daughter of Lemon Drop Kid, since she won an allowance race here in April. Brooke Marie received $55,800 for today’s performance and improved her career record to 12-4-3-1 with earnings of $236,230. The Keeneland sales graduate is out of the Giant’s Causeway mare Mamasez.

Two days remain in Keeneland’s Fall Meet. Racing continues Friday with 10-race program beginning at 1 p.m. ET that features two stakes. The first is the $150,000 Myrtlewood, for 2-year-old fillies at 6 furlongs, which is the eighth race with a 4:44 p.m. post time. The second stakes is the ninth race, the $150,000 Rubicon Valley View (G3), for 3-year-old fillies racing 1 1/16 miles on the turf course. Post time for the Rubicon Valley View is 5:16 p.m.