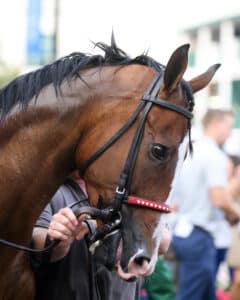 Lloyd Madison Farm’s multiple graded stakes winner Sconsin, the 9-5 second choice in Saturday’s $300,000 Dream Supreme (Listed), has been scratched from the race and will get time off before her 5-year-old campaign.

“This race was going to be her last start of the year before a little winter vacation,” trainer Greg Foley said. “She wasn’t acting like herself the last couple mornings so we didn’t want to chance anything. She’ll get a break and get ready for a 2022 campaign.”

Lothenbach Stables’ Bell’s the One is expected to be the heavy favorite in the six-furlong affair. The Dream Supreme is Race 10 on Saturday with a post time of 5:36 p.m.

It was the 12th time a jockey has won six races on a single card at Churchill Downs but the first since Corey Lanerie in 2012. This was also the first time since 1907 that a rider has won with all six of their mounts, equaling Jimmie Lee.

“I was joking with the guys in the room that I wanted to ride one more and get the record,” Gaffalione said. “It was a really good day at the track.”

Jockeys Julien Leparoux (2008) and Pat Day (1984) are the only two riders to record seven wins on a single card at Churchill Downs.

DOWN THE STRETCH – Racing continued Saturday at Churchill Downs with a first post of 1 p.m. There was a $76,381 carryover in the 20-cent Derby City 6 in Races 6-11 and a $3,797 carryover in Race 11’s Super Hi 5. … In memory of jockey Miguel Mena and to support his family, jockeys at racetracks around the country on Saturday will be wearing black armbands emblazoned with his nickname, “Cholo.” Additionally, several jockeys at Churchill Downs plan to dedicate earned-purse money to Mena’s family. “Miguel was a longtime member of the Jockeys’ Guild and a valued member of each and every jockey colony where he rode,” said Jockeys’ Guild President and CEO Terry Meyocks. “We hope this show of support and affection will bring some comfort to his immediate family, his wife April and daughters Naelah and Montserret as well as his many friends throughout the racing industry.” … Impressive Saratoga debut winner and Breeders’ Futurity (GI) third ClassicCauseway worked a bullet five furlongs in 1:00.40 Saturday with jockey Julien Leparoux up. The Brian Lynch trainee is likely to run in the $400,000 Kentucky Jockey Club (GII) on Saturday, Nov. 27. … Fayette Stakes (GII) winner Independence Hall returned to the Churchill Downs work tab Saturday with a half-mile move in :47.80 for trainer Michael McCarthy. The classy 4-year-old son of Constitution’s next start has not been determined, according to his connections. … Multiple stakes winner Matera breezed five furlongs in 1:01 outside of stablemate Sun Path Saturday at 9 a.m. TheBrad Cox-trainee is likely to enter next Saturday’s $300,000 Chilukki (GIII), according to Churchill Downs stakes coordinator Dan Bork. … First Responders Day with free admission or a discounted $29 ticket to Millionaires Row for active first responders is Sunday. … For more information about the Fall Meet, visit www.churchilldowns.com.