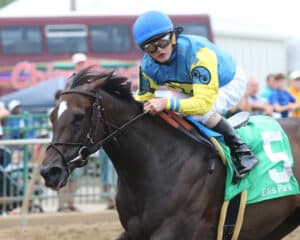 Columbine Stable’s undefeated 3-year-old filly Carribean Caper will attempt to land her fifth consecutive victory Saturday as the likely favorite in the 46th running of the $275,000 Dogwood Stakes (Listed) at Churchill Downs.

The seven-furlong Dogwood drew a compact field of seven 3-year-old fillies and was carded as Race 8 with a post time of 4:22 p.m. (all times Eastern). Saturday’s 11-race card features a stakes trio including the inaugural runnings of the $275,000 Bourbon Trail and $275,000 Harrods Creek, both for 3-year-olds. First post is 12:45 p.m.

Trained by Al Stall Jr., Carribean Caper began her career at Fair Grounds with a scintillating eight-length score. The daughter of Speightstown then cruised to a 4 ½-length first-level allowance victory at Keeneland. Following three months away from the races, Carribean Caper returned in a conditioned allowance event at Ellis Park where she dominated four rivals by 4 ½ lengths. In her most recent start, the Kentucky-bred defeatedMagic Quest by one-length in the $100,000 Audubon Oaks at Ellis. Colby Hernandez, who has been aboard Carribean Caper for all four of her lifetime starts, will ride from post No. 2.

Racing at Churchill Downs continues Thursday-Sunday. Thursday’s eight-race card has a first post of 5 p.m. for Twilight Thursday presented by Blue Moon. The evening features $1 Blue Moon and select domestic beer, local food trucks and live music from Kr8vN8vs. Racing on Friday-Sunday will have a first post of 12:45 p.m. Tickets and more information for racing this week can be found at www.ChurchillDowns.com/tickets.

Select action from Saturday’s card at Churchill Downs are also scheduled to air from 12:30-3:30 p.m. on Fox Sports 2 as part of “America’s Day at the Races.” 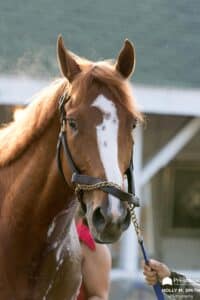 King Fury has run against some of the nation’s top 3-year-old colts this year, including his most-recent fifth-place effort behind top Breeders’ Cup Classic (GI) rated horse Essential Quality in the $1.25 million Travers (GI). Trained by Kenny McPeek, the son of Curlin broke his maiden at Churchill Downs on debut and scored a half-length victory in the $98,000 Street Sense last fall. King Fury’s 3-year-old campaign includes a 2 ¾-length victory in the $200,000 Lexington (GIII) and a runner-up finish to Masqueparade in the $500,000 Ohio Derby (GIII). King Fury will be reunited with jockey Brian Hernandez Jr. for Saturday’s race, who has been aboard the chestnut colt for all three of his victories. The duo will break from post No. 4.

Also entered in the Bourbon Trail is Rupp Racing’s stakes winner Gagetown. Trained by Brad Cox, Gagetown most recently finished third in the $250,000 St. Louis Derby and $250,000 Iowa Derby. The son of Exaggerator won the $50,000 Prairie Mile in June. Martin Garcia will ride from the rail. 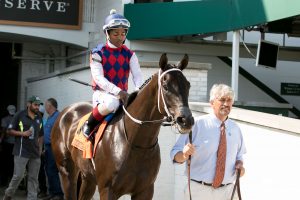 Irish Unity, conditioned by North American and Churchill Downs’ all-time leading trainer Steve Asmussen, has not finished worse than second in four career starts. The consistent son of Pioneerof the Nile won his first two starts in June at Lone Star prior to shipping to Asmussen’s Kentucky string. The homebred finished second to Beaver Hat in a conditioned allowance event at Ellis Park before his runner-up effort to Flash of Mischief in last month’s St. Louis Derby. Brian Hernandez Jr. will have the return mount from post No. 7.

Also entered in the Harrods Creek is Wayne Davis’ four-time Louisiana-based gelding Emerald Forest. Trained by Shane Wilson, Emerald Forest dominated his two most recent starts by a combined 18 lengths at Evangeline Downs and Louisiana Downs. In those starts, Emerald Forest earned stout Brisnet.com speed ratings of 100 and 105, respectively. Jose Guerrero, who’s based at Louisiana Downs, will travel to Kentucky for the mount and will break from post 5.