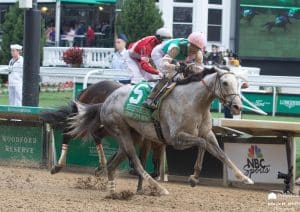 Juddmonte’s homebred Obligatory, last at the head of the stretch, rallied widest of all to post a three-quarters of a length victory over Four Graces to win the 36th running of the $750,000 Derby City Distaff (GI) presented by Kendall-Jackson Winery for fillies and mares Saturday afternoon.

Trained by Bill Mott and ridden by Jose Ortiz, Obligatory completed the seven furlongs on a fast track in 1:22.17. It is the second victory for Mott in the race and the third for Ortiz.

Just One Time opened a clear lead as she carved out fractions of :22.36 and :44.95 with Center Aisle and Edgeway in closest pursuit. On the turn, Center Aisle dropped back and Four Graces entered the fray while 2020 winner Bell’s the One began to close in with Obligatory behind her.

At the top of the stretch, Obligatory was still last when she launched her five-wide move that carried her to the front passing Four Graces inside the sixteenth pole.

Now three-for-three at Churchill Downs with victories in the Eight Belles (GII) and Chilukki (GIII), Obligatory is a 4-year-old Kentucky-bred daughter of Curlin out of the Macho Uno mare Uno Duo. In notching her first Grade I victory. Obligatory improved her record to 11-5-2-0 and increased her earnings to $1,228,594 with Saturday’s $455,700 check.

Bell’s the One finished another neck back in fourth and was followed in order by Kimari, Edgeway and Center Aisle.

Jose Ortiz (Jockey, Obligatory, winner) – “She’s a very nice mare. I feel like she’s getting better and better. I just waited and let her get into her own rhythm. They were going very fast on the front end. I was sitting at the back of the pack. I didn’t want to sweep her off her feet to get a good finish. I was very happy with the trip I had. I swung a little wide because I felt like I had enough (horse).”

Bill Mott (Trainer, Obligatory, winner) – “The only thing I reminded Jose (Ortiz) about beforehand was something he knew: her stretch run is her weapon. The goal with a filly like this is to get her a Grade I. She loves Churchill; for whatever reason she just really does well at this track. She’s won a Grade II and a Grade III here, so we pointed for this race to get her her Grade I. Glad she got it.”

Julien Leparoux (Jockey, Four Graces, second) – “She tried very hard. The race set up perfectly for us. She sat nice early for me, made a big run and never quit. She fought back but was just second best today.”

Ian Wilkes (Trainer, Four Graces, second) – “I really thought we had it inside the 1/16th pole. She ran such a big race.”

Flavien Prat (Jockey, Just One Time, third) – “I thought we were in a good position but we just could not hold off the top two.”