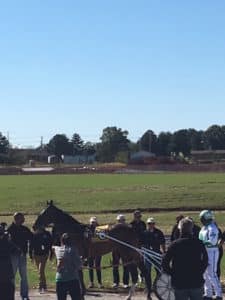 It was just about a year ago when officials from both Churchill Downs and Keeneland promised the Kentucky Racing Commission members that if given the chance; if granted the opportunity; if just issued some race dates, they would deliver on a pledge and a promise of a lifetime.

No matter what the weather may bring their way, they swore — with one hand on a condition book, no doubt — that they would have a race meet in little Oak Grove, KY in less than 12 months, and in October of 2019.

No matter what hassles that the new construction schedule could certainly create, they pledged that they would have a state-of-the-art Standardbred racetrack constructed, built, graded, and ready for horses.

No matter what delays may be lying in wake, they promised that they would have new barns ready for horsemen and women.

No matter what, they guaranteed that they would have new parking lots, pari-mutuel wagering areas ready and raring to go.

On a day full of brilliant sunshine and a Fall afternoon full of brilliant smiles and radiant hopes, Churchill Downs and Keeneland — two of the most historic and iconic racetrack companies and organizers in all of the free world — grew a racetrack right out of the red clay where corn and soybeans were being harvested just a year ago.

On Friday, Oak Grove Racing held its’ first live racing day — as in ever.

On Friday, Oak Grove Racing embarked on a future that is sure only to grown bigger. And, better. And, brighter.

“This is amazing,” said Christian County Judge Executive Steve Tribble, who was on hand to cast an eye on the region’s newest, biggest, and brightest economic development project to come along in years. And, cast a few bets along the way, as well.

“It wasn’t long ago that this was just a corn field. Now, look out at it. This land is growing a whole new business now. Amazing.”

Although the crane sat idle on Friday and alone Highway 41, a new hotel is under construction just across the track on what will be the “front side of the racetrack.”

It’s neightbor, a state-of-the art simulcasting pavilion and home for the Commonwealth’s newest and greatest Historical Racing Machine venue, is already under construction, as well. When completed and officially open for business, the HRM venue could provide hundreds of new jobs and pump millions of new dollars into purses for both Standardbred racing in Oak Grove, and Thoroughbred purses at both Churchill Downs and Keeneland.

HRM venues — like Derby City Gaming in Louisville, the Red Mile/Keeneland venture in Lexington, and the facility at Kentucky Downs in Franklin, KY.  — have already proven to be highly popular with the fan base, and highly productive in producing money to supplement purses for races.

But that’s not all is going up.

A complete Clubhouse and Grandstand will be constructed there, as well.

According to spokespersons for Yates Construction, which is the General Contractor on the job, construction on the new amenities for the racetrack will be renewed as soon as the current meet concludes in November. And, according to the same officials, the new structures should be ready for occupancy and enjoyment by late Spring or early Summer of 2020.

The new racing surface took nearly two months to get right. And, it is. A perfect mix of Western Kentucky red clay underneath. A sprinkling of limestone dusting on top. The surface drew raves from the drivers.

The parking lot on the backside is fully paved.

The grounds — while under construction — offer a glimpse of tomorrow and racing here in the future.

And, well they should be. 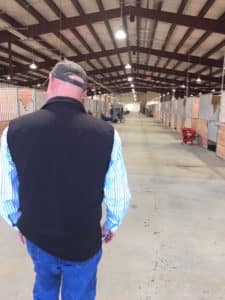 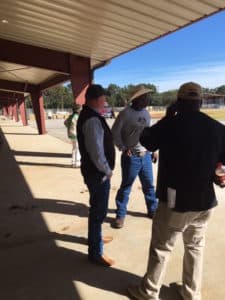 (Marc Guilfoil, the Executive Director of the Kentucky Racing Commission, walks the shed row of the new barns, and chats with horsemen on Friday / Photos by Gene McLean) 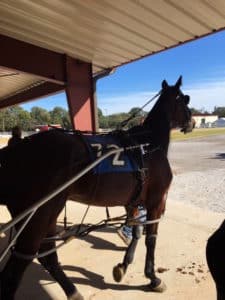 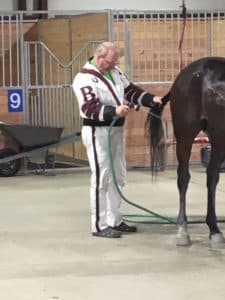 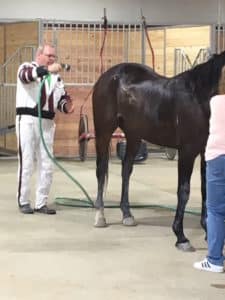 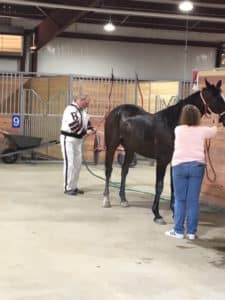 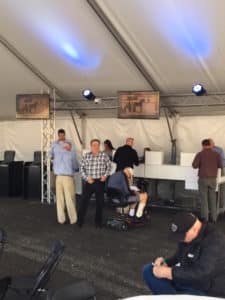 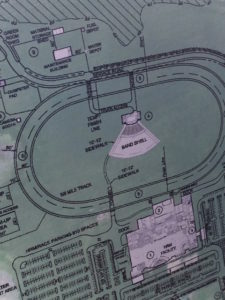 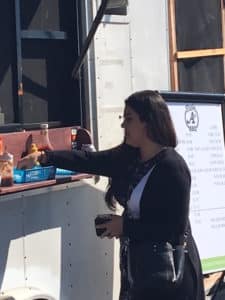 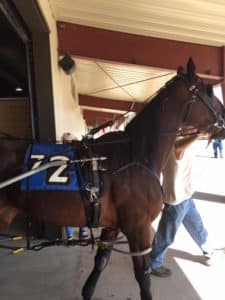 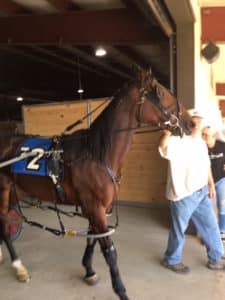 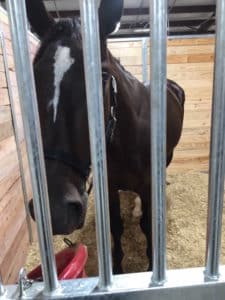 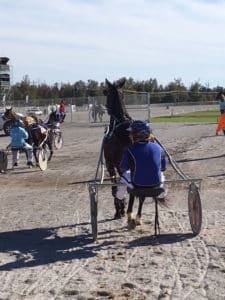 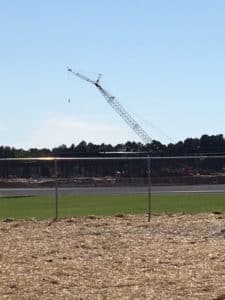 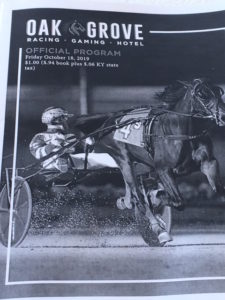 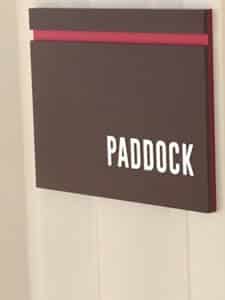 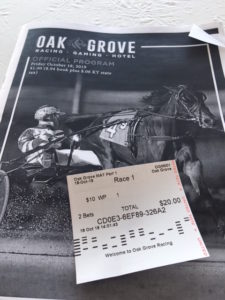 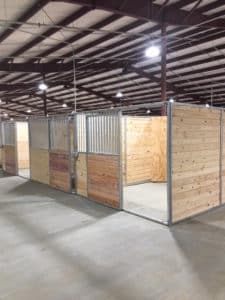 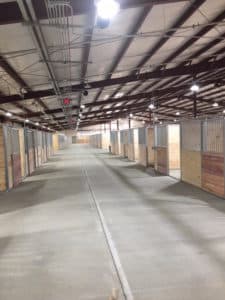 (State of the art barns await the horses to come and race at Oak Grove. Beautiful facilities for both horse and man / Photos by Gene McLean) 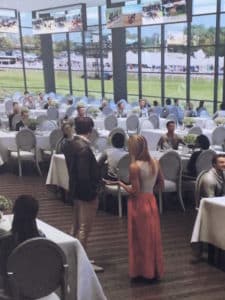 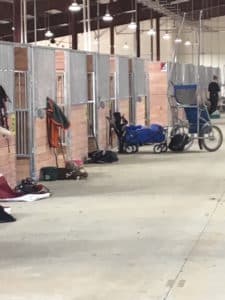 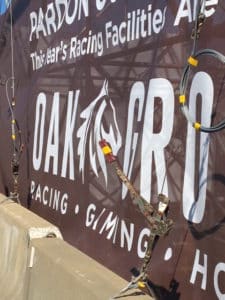 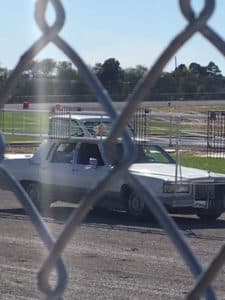 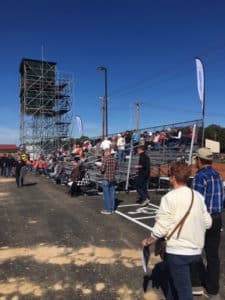 (Racing has come to Christian County / Photos by Gene McLean) 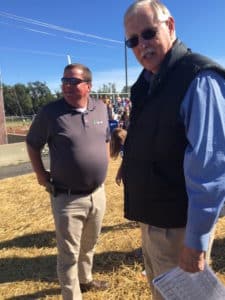 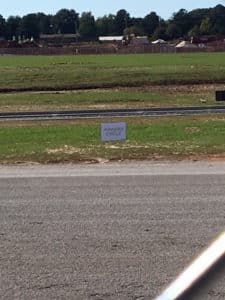 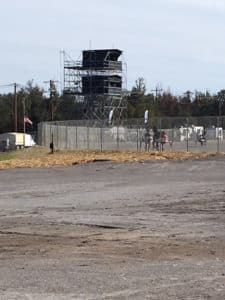 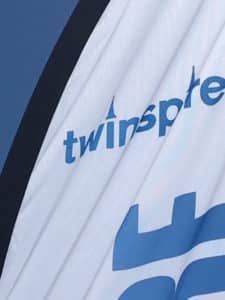 But on this Friday, all the attention was directed to the white Cadaliac starting gate car that zoomed down the 5/8ths-of-a-mile oval and the pacers that soon fell into order just behind. The 1-mile pace — with a total purse of $6,500 — was off.

The crowd, standing in the temporary and make-shift aluminum bleachers, started to cheer as if they were rooting for their favorite horse, and the fact that official, licensed horse racing was being conducted.

The track announcer, full of vim and vigor, called the race as if it was the Kentucky Derby reincarnated.

At the end, Dee Rocks — a 4YO mare by Rockin Image — trained and driven by Jamaica Patton — held off the late closing rally of Delight Fashion to capture the first race ever at the Oak Grove Racing, Gaming and Hotel complex.

If that was not thrilling enough, an 11-year-old  bay gelding by the name of grand name of Justified captured the 2nd Race. It was not the same horse that captured the Kentucky Derby on the way to a Triple Crown victory in the Thoroughbred industry just a couple of years ago, granted.

But it was ironic. And, perhaps, significant for what may be in store in the future on this piece of dusty Western Kentucky soil. All at the same time.

Racing will continue at Oak Grove Racing — which is just a mile from the entrance of the massive and mighty Ft. Campbell military installation in Southwest Kentucky — for the next four weekends. Each Friday, Saturday and Sunday.

It is worth the trip to see racing in Kentucky grow. Up and out.

After all, about a year ago, Keeneland and Churchill Downs promised to deliver one of the best Standardbred racing and gaming venues.

On Friday, the future became the present. And, the promise became a pledge faithfully delivered.

On Friday, Oak Grove became Oak Grow. And, it was fun to see.