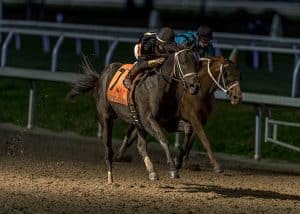 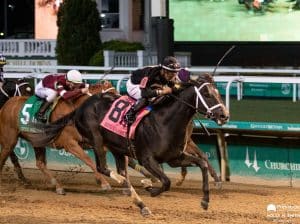 Instant Coffee Was Hot In The Lecomte, Funtastic Again Laughs His Way To Victory In The Leonatus, Cox Duels Down The Stretch, And Marvelous Maiden Winners

Instant Coffee woke up in the middle of the far turn and started picking up ground, and that’s where I’ll pick up because Echo Again and Bromley started reaching their distance limit.

Two Phil’s made a slightly premature move and was 4-wide passing Confidence Game. Two Phil’s never really spurted away from the field, though, and that allowed Instant Coffee to grind away, and then pull away, too.

Grade: “B.” I think there is room from improvements and some people may think that Instant Coffee had a troubled trip. But that happens in horse racing, especially with young horses like these. They will find trouble because of immaturity, running style, and other factors, too. To me? A solid 2nd-tier horse for the Cox barn.

What a battle in the Silverbulletday Stakes.

The Alys Look and Chop Chop — both trained by Cox — were side-by-side action the entire trip. Chop Chop was on The Alys Look’s flank and that was the determining factor, IMO.

Rider Luis Saez, who was up on the eventual winner The Alys Look, dropped his hands to attack the front runner — Hayunevano. Another difference-maker, rider Florent Geroux on Chop Chop, was just edging up.

Those two drew off from the field, separating by about 6 lengths. Throughout the moves, though, Saez made Geroux and Chop Chop go about to the 9 path off the turn. It was difficult to tell if Chop Chop got by at any point, but The Alys Look denied her. They finished this out in the center of the track and they both appeared tired from this ding dong, slobber knocker.

In the end? Another one for Luis Saez and Brad Cox. Owner Ike and Dawn Thrash — who may be heading down the same road as Turnerloose.  Sire: Connect.  Dam: Foul Play.

Grade: “A+”. This race may have taken something out of both these fighting fillies, and I would assume neither got out of their stall the next 2 days. But as a fan, you must love a race like that when two horses, no matter what the competition or class, leave it all out on the track.

Other News at the Fair Grounds:

Determinedly gave his heart out to hold off Tapit’s Conquest in a very nice allowance event that featured some potential stars.

Tapit’s Conquest, who was scratched from the Lecomte Stakes to run in the allowance, had a terrible pace set up. I don’t know if Determinedly was the best horse in the race, but did just enough to win. The winner made it tight on Tapit’s Conquest at the end, and I think Silver Heist is the horse to represent Steve Asmussen next time in the Risen Star.

I think the top 3 contenders have a chance to make a mark for the next Louisiana Derby prep.

Grade: “A-“. For me, this was a very solid race, and all 3 top finishers could improve to hit the board in the Risen Star. But compared to the Lecomte, it would be a “C or C+”. But…these can work their way to being an “A-” in the Graded Stakes company to come

This week’s Stakes may have been more revealing than the New Orleans’ 3YO Stakes races. But? To me, that’s not a positive.

Funtastic Again was unchallenged. Itzos, Raise Cain, and Hayes Strike all had their chances to do something. But they all did very little, IMO.

I thought Itzos would be towards the front and put pressure on the Ward trainee, but that didn’t happen.

Raise Cain was not good.

Hayes Strike might be in for claiming next time out.

And, all this, allowed Funtastic Again to go slow up front, and just ease his way home. The problem for me was that even this one came home slower than what he should have, considering how slow he went up front.

Well,  American Speed and Ironside both ran the best race they have had, to date.

Funtastic Again made it look easy, but the only horse I would want to play out of this race in the future is Mendal’s Secret — who went to his nose out of the gate and lost all chance. He was supposed to be the pressing speed against Funtastic Again.

Grade: “F.” I learned nothing about any horse in here that I would really consider again. It’s no offense, but if I put that group against the 2nd-tier horses at the Fair Grounds? IMO, it wouldn’t be a contest. 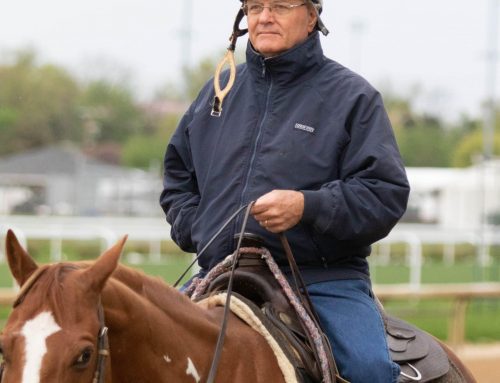