Opinions, Observations & Outlooks: “Racing As It Was Meant to Be?” I Think Not; Breeders’ Cup? I Can Sit This One Out

Opinions, Observations & Outlooks: “Racing As It Was Meant to Be?” I Think Not; Breeders’ Cup? I Can Sit This One Out 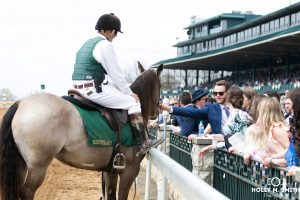 Here’s a few thoughts, ideas, suggestions, and, quite honestly, serious complaints about the decisions — or lack thereof — by some so-called leaders in the Thoroughbred industry.

The grand ole’ “First Lady” of Thoroughbred Racing used to be Keeneland.

A place built on the sturdy limestone pillars that were unearthed from some of our very own hills and the very God-made bricks that helped supply the nutrients that construct both a staunch Thoroughbred and a hearty bourbon.

A place that used to stand above the fray and all the rest of racing’s homes — like a castle in the old country. A place to run to for both protection and preservation when the winter winds would come calling. A place you could count on to be there, whether the enemy be nature or man.

“Keeneland…racing as it was meant to be.”

And, it was burned into both the memory banks of yesteryear and into the thoughts of more to come in the future. It was more than a saying. It was a rite and a right.

I’m afraid that saying doesn’t hold much weight or merit any more. Sad.

A year ago, on the verge of hosting the Breeders’ Cup in the midst and hailstorm of Covid — First Round, Keeneland made some weak announcement that it would hold the annual racing Championships without fans. For the health and safety of the public and your own well-being, patrons would not be permitted on the premises.

Yet, we all knew that was bull manure.

After all, the Keeneland Club members were able to purchase their regular seats in the clubhouse.

After all, the box seats that sit so pretty in the direct sunlight of the Western sky were filled to capacity with people twirling those pretty little parasols.

After all, temporary seats — on little platforms — were erected on the apron to house some other people, whom I am sure each and all had a direct connection to owning some part of a horse participating in the races.

After all, the big bettors still got the chance to purchase tickets to their regular seats in either the Equestrian Room or the Bluegrass Room.

In short? If you had the money, honey, Keeneland had the time. And, space.

In truth, the only ones that were told to stay home were the hard boots and the muddy shoes of those that could occupy General Admission. Now, if you were one of those kind? Keeneland had the moral aptitude to draw the line and help you stay safe and Covid-free by denying your entry.

Thanks, Keeneland. Much appreciated.

But remember race rans, “Welcome” only applies to those peeps that can once again afford it.

In July, Keeneland — long before this serious and deadly wave of Covid Second Round — announced that it was going to change its’ long-standing policies and operations as it pertains to “General Admission.”

Instead of allowing for walk-up and walk-in, after payment of the admission fee, Keeneland was transitioning to pre-sale operations. You could buy a GA ticket online for $7. The day of the races, you could purchase an online ticket for $10, if any were still available and left for consumption. If you want, you could purchase a GA ticket for the entire meet for $40. Of course, you had to do that online.

Nobody knows what the maximum number of General Admission tickets is? How many people would be allowed entry? How many tickets would there be per day? How was or is one to know the demand and the supply? How far in advance must one seek tickets? Nobody seems to know. Nobody, truly, seems to care.

What if you are someone who does not know how to go online and preorder tickets? Strange as it may seem or sound, there are still people in our midst who simply do not have that knowledge or ability. The fact is some folks don’t have the ability to comply with this new process, and, as such, are now prohibited from ever attending.

Without a question, this new policy is both discriminatory and prejudicial by its’ very nature. Some people are excluded for ever going and enjoying a weekend at the races in their very own community. And…in a sport that desperately needs more diversity and easier access for one — and all — this is simply not the answer to a very serious question. Why make entry so difficult and demanding.

I have long advocated that racetracks should never charge for admission, unless it was for a major race day and/or event.

The doors to their Historical Horse Racing venues are always open. No one there sitting on a stool and rudely snarling and ordering payment just to gain access and an opportunity to lose their money.

The doors to the casinos just across our bodies of water in Indiana are open. Those operations never charge admission.

The doors to the new sports betting venues located in nearly every state that borders Kentucky are open, or will be opening very soon. Those operations don’t charge admission.

So why do our racetracks?

So why does Keeneland suddenly increase the fee for admission?

So why do we make ordering, purchasing and gaining entry so difficult?

Make no mistake about it, this policy does exclude.

Grab your blanket or your towel and come sit on “The Hill” and watch Keeneland on TV, if you wish. You can do that for free.

But if you want to go to the track and up to the rail, like you used to do?

“Racing as it was meant to be?”

I don’t think so.

“Racing as it should be?”

I sure hope not.

James E. “Ted” Bassett III, the longtime President, CEO and Trustee Emeritus at Keeneland, once said to me, and I will never, ever, ever forget:

“You never go wrong by doing the right thing. You never stray by taking the high road over the highway.”

Seems to me that Keeneland’s decision-makers could certainly use a little of Mr. Basset’s logic and reminder of what the old slogan truly means.

Racing should not be for one, or the very few.

It should be for all. Including those with hard boots and muddy shoes.

That’s the way racing was meant to be.

Or, at the very least, that’s the way racing should be.

The Breeders’ Cup will be held the first weekend in November and at Del Mar in California. It is truly one of the sports’ greatest days and most amazing accomplishments of the late, great John Gaines.

Every year, I look forward to these days and this weekend of Friday and Saturday celebrations. They are the best two days of racing in the world, outside of those set aside annually for the Kentucky Oaks and the Kentucky Derby. The collection of both human and equine athletes is remarkable and amazing. The races are incredible works of art that combine grit and grind with ability and athleticism.

Each year, I can’t wait for the Breeders’ Cup. These horses are prepped and prepared. These people are pumped and primped.

This year, though, I can wait.

This year, the Breeders’ Cup can just wait.

This year, the Breeders’ Cup will not be the same. It will forever have an asterisk tagged alongside its’ very name. It will be tainted.

Unfortunately, the Breeders’ Cup Board of Directors has not done its’ job and has failed the very person that made it happen and a reality.

Unfortunately, the Breeders’ Cup officials will allow horses trained by the embattled Bob Baffert — a man who has had more horses test positive in Grade 1 Stakes races over the past few years than anyone else in our sport — into the biggest and best day of racing.

Unfortunately, the Breeders’ Cup Board — which went so far as to ban Lasix from ever being used on a Breeders’ Cup Day and prohibit any horse from running in one of its’ title races with the anti-bleeder medication — will permit entries from a trainer with far more credibility issues than those created by Lasix, for God’s sake.

Unfortunately, the Breeders’ Cup is now lauding the fact and is now promoting the future that Medina Spirit — who tested positive after winning this year’s Kentucky Derby — is a “Win & You’re In” participant in this year’s Breeders’ Cup Classic.

All of this could have been avoided if the Breeders’ Cup had done the right thing and followed the lead of both Churchill Downs, who banned Baffert from its’ grounds and entry box, and NYRA, which has attempted to do the same.

All of this could have been cleaned up, so to speak, if Breeders’ Cup had held both its’ respective heads and standards higher.

All of this could have been addressed with a little intestinal fortitude based on transparency and credibility. Hold a hearing. In public. Allow Baffert and his attorney to have their say — whatever that might be on this day. Allow the racing officials and others to have their say. Allow the public to have its’ say.

We all know what the right thing to do here is. We all know.

Why is it so damn tough to just do it?

What did Mr. Bassett — who once served as the President of the Breeders’ Cup, too — say about high roads and right decisions?

Once upon a time, I got a job doing some consulting and freelance work for Mr. Gaines, and his constant ally and friend Fred Pope.

I never — not even once — ever questioned their wisdom and/or desire.

I never — not even once — ever doubted their goals and/or credibility.

I never — not even once — ever had to think twice abut what they were trying to accomplish for the game; for the horse.

They wished to craft a national “Championship Day” of racing that could and would declare our Eclipse Award winners by races and not ballots.

They always aspired to creating a national organization that could lend guidance and oversight. An organization and could and would demand higher standards and more accountability.

This Breeders’ Cup Board failed in that mission.