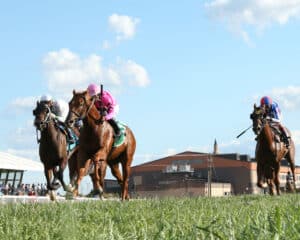 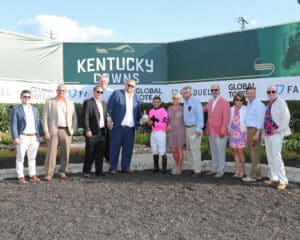 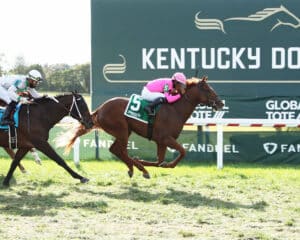 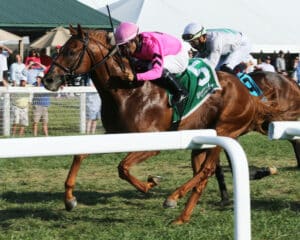 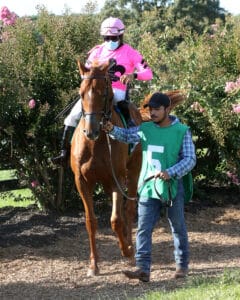 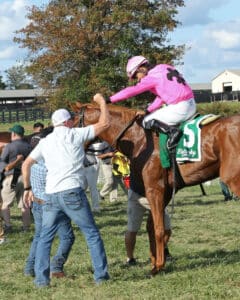 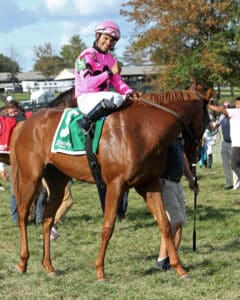 A $17,000 purchase as a weanling at Keeneland’s 2019 November sale, the 2-year-old colt Red Danger was the lowest-priced horse that Bonnie and Tommy Hamilton’s Silverton Hill LLC purchased that year. Now the chestnut son of 2013 Kentucky Derby winner Orb could be on his way to being the Hamiltons’ biggest money-earner.
With Luis Saez aboard, Red Danger wore down pacesetting favorite Kaufymaker and then held off Romancer for a three-quarters of a length victory in Thursday’s $500,000 Global Tote Juvenile Sprint at the FanDuel Meet at Kentucky Downs.
“We’re so happy about this because he was the least expensive horse we bought that year,” Bonnie Hamilton said. “Phil Hager picked him out, so anything from there is gravy. He’s done everything right, and just fun to have one. They don’t come around very often…. That’s a really great thing. I mean, we’ve bought them for more than that. But it encourages people to think, ‘I have a racehorse without spending $100,000, $200,000.’ Which we have.”
Kaufymaker, who took the lead in upper stretch after pushing a swift early pace, gave way to settle for third, another three-quarters of a length back in the field of eight 2-year-olds.
“It was perfect,” Saez said. “That was the trip we were planning to get. He’s a come-from-behind horse. He broke good today. He was right there. The main thing was try to relax, let the speed go and sit behind the speed. When we came to the top of the stretch, he made the move. He was a little confused with the turf at the three-eighths because it’s a little like dirt. But when we came to the top of the stretch he gave me that kick, so we got there on time.”
It was Saez’ second victory ever at Kentucky Downs amid limited opportunities; his first coming in the 2018 Dueling Grounds Derby on Channel Cat. Brian Lynch also became the first trainer to win the Juvenile Sprint other than Wesley Ward, who won the first three runnings of America’s richest 2-year-old turf stakes outside the $1 million Breeders’ Cup Juvenile Turf Sprint.
Red Danger finished fifth on dirt at Saratoga in his debut, then won at 5 1/2 furlongs on turf in his next start.
“He’s really been a problem-free colt that just kept getting better,” Lynch said. “Every time we worked him leading up to his first race he just kept getting better. Never left an oat. Never had a pimple on him or a snotty nose. So we tried him on the dirt first time because he worked so well, but I always have a tendency to try my horses on the grass. So he ended up on the grass next time and won very impressively.
“We came back and had a work in between and the work was just fantastic. Mike Luzzi worked him for me up at Saratoga and he said, ‘Not only did he work good, I just couldn’t pull him up.’ That gave me hope that we could press forward here in the 6 1/2 and gave us a glimmer of hope he could be Breeders’ Cup Juvenile Turf Mile horse. This is an undulating sort of track, so 6 1/2 plays like seven.”
Red Danger covered 6 1/2 furlongs in 1:16.51, paying $7.20 as the third choice.
“The one bit of confidence I had going into this race is that I always felt he’d do his best running late,” Lynch said. “So when I saw him sort of get to the outside there and I could see him digging in, I always thought he’d close ground. Whether he was good enough to beat them, he wasn’t going to back out of it. So it was great to see him prevail.”
Ward was vying to win the stakes for the third time in four years with a filly.
“She ran good. Did everything right. Just got outrun,” he said. “She ran a great race… She made the lead like she was supposed to. Maybe it’s just a distance issue. She ran great and the winner ran tremendous.”
The start was delayed when No. 7 Detroit City reared in the gate, then twisted and had his front legs over the back doors of his gate stall, tossing jockey Adam Beschizza in the process. Even as Detroit City was extricated and burst out the back, No. 6 Pure Panic bolted out the front and ultimately also was scratched. Both Detroit City and Pure Panic walked off the track on their own. Trainer Jack Sisterson said Detroit City was unscathed. Beschizza’s agent, Liz Morris, reported that the jockey also was OK.
— Jennie Rees
2021-09-10T09:31:45-04:00By The Pressbox Staff|