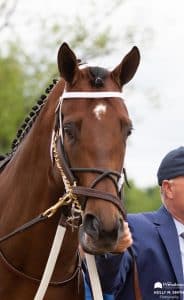 A series of special events and fundraising opportunities will take place to commemorate Ukrainian Independence Day, which marks the date of Ukraine’s declared independence from the former Soviet Union in 1991. Fans are encouraged to wear yellow and blue in celebration of Ukraine. Members of the Ukrainian Congress Committee of America (UCCA), the largest nonprofit in the United States dedicated to offering aid to war-torn Ukraine and its displaced citizens, will accept monetary donations at the admission gates and Community Outreach Booth from 11 a.m. to 5 p.m. Ukrainian-American vocalists will perform the national anthems of both the United States and Ukraine at approximately 11:30 a.m. prior to performances by Ukrainian-American singers and dancers following the second and third races of the afternoon.

The Ukrainian Congress Committee of America will lead the racing week at the Community Outreach Booth. It is the largest nonprofit in the U.S. dedicated to advancing and supporting Ukrainian Americans and is currently working to offer aid to war-torn Ukraine and its displaced citizens.

NYRA will honor veterans and active-duty military members during its annual Military Appreciation Day with free grandstand admission (proper identification required). Members of the West Point Parachute Team will perform a pair of jumps onto the infield at 11:45 a.m. and, then again, at approximately 4:40 p.m. World War II and Korean War veteran Al Shemo will ring the bell prior to the third race named for Military Appreciation Day. The fifth race will honor active-duty members of the New York military services, including Naval Support Activity (NSA) Saratoga Springs and the National Guard.

Horseplayers can enjoy the Saratoga Low Roller Contest every Thursday and Sunday at the Spa. Players can pre-register outside the Miller Time Fourstardave Sports Bar on contest days. There is a $40 buy-in, of which $30 will go to the players’ bankroll and $10 to the prize pool. Winners will also receive a t-shirt in addition to the cash prize.

NYRA will host Operation Adopt A Soldier, which will collect monetary donations throughout the day. The organization supports U.S. soldiers worldwide by sending care packages, gifts and letters to provide them with a sense of home while stationed overseas.

New York-breds take center stage for New York Showcase Day, featuring six stakes for state-breds worth a combined $1.25 million. The card is headlined by the $250,000 Albany, a nine-furlong test for sophomores. Also featured are five $200,000 stakes including the Fleet Indian for sophomore fillies; the Funny Cide presented by Rood and Riddle Equine Hospital for juvenile sprinters; and the Seeking the Ante for juvenile filly sprinters. The lucrative New York Showcase Day card also sees two stakes garner a $50,000 purse boost in the $200,000 West Point Handicap presented by Trustco Bank for 3-year-olds and up; and the $200,000 Yaddo Handicap for fillies and mares 3-years-old and up.

In honor of New York Showcase Day, fans can enjoy a sampling trifecta of New York-made spirits and hard cider from Cooperstown Distillery, Great Jones Distilling Co. and Nine Pin Cider Works. Samples will be available for guests 21 and older from 1 p.m. to 4 p.m., while supplies last.

NYRA and CDPHP will announce the 2022 Hometown Heroes with a special ceremony in the Winner’s Circle. The five Hometown Heroes, nominated by their peers, are individuals who have made extraordinary contributions to improving the quality of life for residents in their communities.

The Purdy’s Summer Concert Stage will host live music from The McKrells.

For the fourth consecutive year, FOX will present live coverage and analysis of the Runhappy Travers as part of a 90-minute broadcast, which will begin at 4:30 p.m. Eastern time. Saratoga Live will feature all of the action from Saratoga Race Course beginning at 11:30 a.m. on FS1 with continuing coverage on FS2 at 2 p.m. After the conclusion of the broadcast on FOX at 6 p.m., coverage will resume on FS2 through 7 p.m.

Guests 21 and older can enjoy complimentary samples of Woodinville Bourbon Whiskey from 1 p.m. to 4 p.m., while supplies last.

NYRA will host the Backstretch Employee Service Team (BEST), which is committed to providing the men and women who work on the backstretch of Saratoga Race Course, Belmont Park and Aqueduct Racetrack with health and wellness services needed to keep this community strong.

Runhappy Travers Weekend concludes with a pair of stakes led by the Grade 1, $500,000 Ballerina, a seven-furlong sprint for fillies and mares 3-years-old and up that offers a “Win and You’re In” berth to the Breeders’ Cup Filly & Mare Sprint; and the $135,000 Better Talk Now at one mile on turf for sophomores.

Fans are invited to enjoy a brunch buffet while experiencing The Rail at the 1863 Club, the venue’s first-floor banquet space. Tickets are $95 and include admission, a table seat for the day, brunch buffet, soft drinks, two mimosa or Bloody Mary drink tickets, Post Parade, tax and gratuity. Reservations are available by calling the NYRA Box Office at 844-NYRA-TIX or online at Ticketmaster.com.

The popular family-friendly weekly event features a wide variety of free activities, games, attractions and educational experiences from 11 a.m. to 4 p.m. at the Berkshire Bank Family Zone, located inside Gate A near the Saratoga Race Course Box Office.

Rounding out this week is the Disabled American Veterans of Albany, which is dedicated to empowering veterans to lead high-quality lives with respect and dignity.

All events and activities are subject to change at the discretion of NYRA.