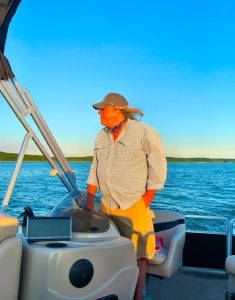 We managed to scrap together 4 wins on the 11-race card at the ole’ ball yard in Lou Lou on Saturday. Also, we managed to boot home 6 exactas on the day.

The biggest thrill of all, though, was in the 5th when we got our “Longshot Special of the Day” to cross the finish line first and pay handsomely for his efforts, as well.

Here’s a look at our Sunday’s best…

1st: 7/5-3-2/4-6/1-8…The first “Key Play of the Day” comes in the very first race of the day and what we like to call the ole’ lid-lifter — Escape Fund (7). This 4YO daughter of Lea comes in here off three impressive races in a row. Won here in June by a whopping 71/2 lengths and now drops back into the claiming ranks for a price tag lower than ever before. Gets a top rider up, and he guided this one to victory here in that June 6 romp. In 10 career starts, this one has a 2-2-1 mark and just simply looks the best — especially if she can find the same motor that she flashed here before. I bet the 7 to win/place/show and then key the 7 over/under the numbers listed in the exactas. More withe the 5-3-2 than the rest.

2nd: 5-7-1/3-4-6/2…Carmichael (5) is the last name of one of my best friends, who will be retiring soon and leaving as head of the Indiana Beer Distributors Association. No connection here with the horse, of course. But I like the name. And? I like his game, too. This one ran 3rd over the grass at KY Downs last time out. Switches to the main track here and the barn wins with .12% of those making this surface switch. Does have a second in only previous run over this track. Looks like this one will close. Per Diem (7) was claimed last time out and he nearly won that one off a 13-month layup. Has speed. Will gun it. They will have to catch this one over a track that has favored the speedsters so far this September. Koufax (1) is a great name in its’ own right. Most kids won’t remember, but this lanky lefty was one of the best ever back when baseball was played by men and not by computers. (Editorial comment there.) this 3YO goes to the post with a significant drop for a top trainer, who has a 1-0-2 mark in the first 4 starts this met. Look out here. One to beat, IMO. I bet the 1 — take note — across the board and then box the top 3 in the exactas. I will key the 1 over/under all the numbers listed in two smaller units.

3rd: 1-7/2-6/3-4-5…Ultimate (1) could be just that in this heat. Drops from the $50,000 level — where he was claimed last tim out in June — to an all-time lowest price tag here. Barn wins with .26% when dropping off the claim and with .15% when racing for the first time after a claim purchase. Took a break after the purchase and now drops. That is more than a bit concerning. but if this son of Speightstown is cranked. He’s gone. Cold as Hell (7) drops all the way to the $20,000 tag here. Never offered for this cheap, either. Ran a big one to win here in May. If he can duplicate? Look out. I bet the 1 to win/place/show and then box the 1-7 in the exactas. I will key the 1-7 over/under the rest of the numbers listed in two smaller units.

4th: 2-5/6-3-8/1-4-7…Popizar (2) gets the nod on a day where the 1-word names seem to be very popular. This 7YO son of Tapizar comes in off some rough outings of late. In fact, has been out 9 times this year without a win. Drops to the lowest level ever here and may be time to look for another career soon. But, if he still remembers what he used to be like? Could pop. Futile (5) is another one-word name horse. This one won just two starts ago and in 10 starts this year, this one has hit the board 6 times. Current form is much better and the works are steady. In 8 starts here before? Has 2 wins. that’s .25% any way you cut it. Nice number. I bet the 2-5 across the board and then box these two in the exactas. I will key the 2-5 over/under the rest of the numbers listed in two smaller units.

5th: 7-6/1-3-2/4-5…Brew Crew (7) is a 4YO son of Blame and one that has faced some very good ones of late. Look at the race two back. Derby Date just ran in the first LTS Stakes at Churchill Downs. He beat Dennis’ Moment in his next out after that win. Over the last three outings, this one has been right there. Gets a huge rider switch here and the barn is having a good year. Big threat and as must-use for me. Auburn Hills (6) is the ML favorite, according to my good friends over at Brisnet.com. this one has hit the board in each of the last 5 and had had a very good year. Nearly won at Saratoga last time out and that would have ben two wins at “The Spa” this summer. Has gotten good. I bet the 7-6 across the board and then box those two numbers in the exactas. I will key the 7-6 over (only) the rest of the numbers listed in a smaller unit.

6th: 4-7/1-2-5/3-6…Indimaaj (4) gets us back to the one-word names, again, and this one looks the part on paper, too. In 4 starts in his career at this distance? Has a win and 3 seconds. Gets a top rider to take the reins after moving to the Midwest from the Left Coast. Third start off the layoff could be the ticket here. Pit Boss (7) is my first “Longshot Special of the Day.” This 4YO son of Union Rags ran well last time out and drops into the claiming ranks here. Barn wins with .12% in the 3rd start off the layup and with .20% overall in the claiming ranks. Like this rider switch. Could come with a nice late run to top this field. And, I love the 8-1 ML odds. I bet the 4-7 across the board and then box those two in the exactas. I will key the 4-7 over/under the rest of the numbers listed in two smaller units.

7th: 3/5-1/2-4/6…The next “Key Play of the Day” comes here with Flash Magic (3). This one ran 2nd as the beaten favorite last time out at Ellis Park. The barn wins with .25% of those returning as a defeated fan’s choice. Gets a top rider up and that may make a huge difference in this one. Ran 3 seconds as a top 2YO last year. Was moved from the barn of Bob Baffert by Stonestreet Stables owner Barbara Banke after all the issues this Spring. Thanks be to the new Chairman of the Breeders’ Cup. Time to take a stand. This one has talent. This one has speed. This one could air these here. I bet the 3 to win/place and then key the 3 over/under the numbers listed. More with the 5-1 than the rest.

8th: 7-6-3/1-9-5-4/8/2…Famed (7) gets the nod here. Yep. One. Word. Name. Again. This 2YO daughter of Uncle Mo is a Godolphin Stables homebred and comes from a nice Stakes-placed dam. Dam has a winner from 2 starters and a Stakes winner on the ground. This one is working lights out for a barn that wins with .25% in the MSW ranks. Cold here this meet so far. That’s going to change. Only 1-for-14 so far. Change time. Howboutdemapples (6) ran huge on debut and then backslid a bit in the next outing. Gets a top rider to take over here and that is a huge rider switch. Could be a pace factor in here, as well. Beautiful Empire (3) is my next “Longshot Special of the Day.” This 2HO daughter of Classic Empire has been working lights out for a barn that wins with .16% on debut in the MSW ranks. Dam has a winner from 2 starters and the rider is red hot over the past week. Could spike a fast temp on the lead here, too, with a good break. I bet the 7 to win/place/show and then box the top 3 in the exactas. I will key the 7 over/under all the numbers listed. More with the 6-3-1-9 than the rest.

9th: 1-7/2-3/4-6/5…Core Beliefs (1) returns to the gate for just the 3 times this year, and looks to be sitting on the muscle here. The 6YO has won nearly $1 million in purses over his career. This could propel him over the mark. Drops back from the Stakes race at Saratoga into this allowance. Has raced here 3 times and has 2 thirds. But? Has a win and 2 thirds in 4 starts at this distance. Stands out here. Trident Hit (7) has hit the board in each of the last 3 outings and has 2 wins in 4 starts here. Gets the meet’s top rider in the irons for the first time and works coming in are good. Will be the one to beat. I bet the 1 across the board and then box the 1-7 in the exactas. I will key the 1-7 over/under the rest of the numbers in two smaller units.

10th: 10-12-6/4-7-11-5/8-3-2…You always bet the #10 in the 10th race, right? Well, you do when it is the best horse. This time, I think it is. Upandcomingstar (10) — another one word name — come in off two straight 3rds to begin the career for HOF trainer Steve Asmussen. Gets a big rider switch here and returns as a beaten favorite for a barn that wins with .25% of those types over the last 967 to fit the definition. Is a daughter of the great Into Mischief and cost $500,000 to purchase at the 2019 KEE September Yearling Sale. Look out here. Finally gets away from a horse that has beaten her twice. Look out. Could be long gone. Sarah Harper (12) ran a huge one on debut and over the slop at Saratoga. Gets a faster track and a drier one here, too. Works are spot on. Looks like a true speedster with talent. Look out at a square price point. Smarmy (6) was purchased for $700,000 at the 2020 2YO Sales. Has been 2nd twice and third once in three starts. Has speed will travel. Speed rider gets the leg up. No mastery what this one will do. Can they catch her? I bet the 10 across the board and then box the top 3 in the exactas. I will key the 10 over/under the 12-6-4-7-11-5-8 in two smaller units.