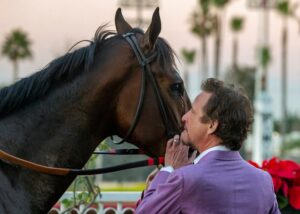 A lights-out winner of his last two starts, Jungle Racing LLC’s homebred Straight Up G appears a standout versus five sophomores going a mile and one sixteenth in Saturday’s $200,000 California Cup Derby at Santa Anita.

One of five California Cup Day races on a 10-race program, the Cal Cup Derby will be center stage as Straight Up G and his rivals attempt to follow in the footsteps of the Art Sherman-trained California Chrome, who used the 2014 Cal Cup Derby as a springboard to glory in the Santa Anita and Kentucky Derbies as well as the 2014 Preakness Stakes.

Like California Chrome, the Richard Baltas-trained Straight Up G, a bay colt by red hot sire Straight Fire, out of the Sky Mesa mare Gidget Girl, comes off a big win versus statebreds in the one mile King Glorious Stakes run at Los Alamitos on Dec. 12.

“He’s doing everything really easily,” said Baltas on Friday morning.  “Last time, he handled the two turns with no problem.  He’s still growing, he big, he’s good looking and he’s got a good mind.  Hopefully he can get this done tomorrow and then maybe we can tackle open company.  He’s got size, he’s got length.  The other day, he went five eighths, I got him in 59 and four (fifths), they gave him a minute and one and he galloped out (six furlongs) in 1:13 and one.  He did that all on his own, he was by himself.

“I think he wants to go farther.  I really don’t think he’s a sprinter.  He’s got a lot of natural speed and he looks like a good, solid route horse.  The sire’s had nothing but runners, so we’ll see how far this horse can go.”

Owned and bred by sports talk icon Jim Rome and his wife Janet’s Jungle Racing, Straight Up G debuted as an even money favorite going 5 ½ furlongs here on Oct. 9, but finished a disappointing fourth.  Subsequently off at 4-5 in a six furlong maiden special versus Cal-breds on Nov. 21 at Del Mar, he aired by 5 ¼ lengths, earning a lofty 80 Beyer Speed Figure.

Off at 2-1 in the King Glorious, he led throughout in a thoroughly dominant performance, winning by 3 ½ lengths over Finneus, who he will again face on Saturday while earning a 75 Beyer.

With Ricky Gonzalez back to ride for a third consecutive time, Straight Up G appears headed for the deep waters of the Kentucky Derby Trail should he replicate his performance in the King Glorious on Saturday.

Like California Chrome, Straight Up G has to be considered a bit “light” in terms of his maternal pedigree, as his first dam, the Sky Mesa mare Gidget Girl, who although she has produced a talented half sister to Straight Up G, the Baltas-trained Gidgetta (three wins from 11 starts, earnings of $154,309) was unraced and his second dam, Rome’s Brazilian-bred Surfer Girl, finished her career 11-1-5-1, with her lone win coming in her native Brazil.

As for his sire, Straight Fire, he was a highly regarded juvenile who sold for $250,000 as a yearling and finished second as the 4-5 favorite in the 2016 Grade I Del Mar Futurity.  Subsequently third in Santa Anita’s Grade I FrontRunner Stakes, he retired with one win from four starts and earnings of $146,400.

There should be a special shrine in the Hall of Fame for horses like Camino Del Paraiso.

The nine-year-old son of the late stallion Suances who stood for $1,500 is a bargain that keeps on giving.

Purchased for a paltry $5,000, Camino Del Paraiso has never won a graded stakes in his 45-race career, but nickel and dimed his way to a bankroll of $579,392, with nine victories, 13 seconds and four thirds.

He has run in 12 straight stakes races and 27 overall.

Santa Anita focuses the spotlight on California-breds Saturday with five lucrative stakes for horses bred in the Golden State offering purse money of $900,000.

Veteran trainer O.J. Jauregui is hopeful Camino Del Paraiso (“way to paradise or “path to paradise”) can make amends for his near-miss in the 2018 Turf Classic when he fell a head short under Flavien Prat, who had yet to become a household word as a world-class rider.

“The horse is training really well and doing everything I want him to do,” said the 56-year-old Jauregui, who came up under the legendary Hall of Famer Jack Van Berg and then the late Rodney Rash, and whose younger brother, former jockey Luis Jauregui, is now a California Horse Racing Board steward.

“But overall, he’s doing well. He’s been kicking and bucking since he got to Santa Anita. He’s feeling good. That said, I think he’s one of Golden Gate’s favorites (having raced at the Bay Area track 28 times, winning eight).”

Bred by Red Baron’s Barn LLC, Camino Del Paraiso is winless in seven races at Santa Anita, so victory in the Turf Classic would fill a void on his extensive and consistent resume.

However, he has enjoyed three seconds here, in the aforementioned 2018 Turf Classic and in the San Luis Rey and the Thunder Road, each a Grade III event, in the winter of 2020.

“I’ve had the horse since he was a yearling and he’s a class act,” O.J. said. “He’s a professional, just a very cool horse.”

Brian Koriner has three horses entered Saturday in hopes of accumulating a share of the $900,000 in purse money offered to California-breds.

“Ferrariano is facing tougher horses,” said Koriner, 55, a native of Montebello who earned the California Thoroughbred Breeder Association’s award as Trainer of the Year in 2009 when California Flag shared CTBA’s Horse of the Year honors with Breeders’ Cup Sprint winner Dancing in Silks.

“He’s a first-condition horse but he’s doing really well,” Koriner added of the four-year-old gelded son of Mshawish bred by Ken Miles and Sheridan Jones. Ferrariano was second by a neck in the restricted Snow Chief Stakes last June at 1 1/8 miles on turf, the same distance as the Turf Classic.

“Letsgetlucky is coming off a layoff (finishing third last Nov. 27 at Del Mar) but Super Game just came off a really big effort (winning a Santa Anita allowance race Dec. 26 on dirt that originally was scheduled for 6 ½ furlongs on turf.

“It’s a little quick back but the race on turf down the hill was taken off the grass and she ran huge on the dirt, so this will be her first time down the hillside turf course,” Koriner noted.

Bred by Premier Thoroughbreds, Super Game is a four-year-old daughter of Super Saver with a 3-2-3 record from 15 starts, earning just under $200,000.

“There are some tough horses in the Sprint but Letsgetlucky is doing super,” Koriner said.

A four-year-old Munnings gelding, Letsgetlucky has never been out of the money in seven starts, winning two.

“It’s a small field so we’re taking a chance,” the trainer said of the gelded son of 2017 Santa Anita Handicap winner Shaman Ghost, whose best showing in eight starts is a second via disqualification.

“Realistically, if we hit the board, we could get him stakes-placed and we’d be happy with that.”

With the possibility of a $4 million total pool, Santa Anita will offer a mandatory payout in Saturday’s 20 cent Rainbow Pick Six Jackpot, which will be comprised of races five through 10.

With a Rainbow Six carryover from Sunday into Friday of $391,923, the carryover into Saturday should be approximately $450,000, providing there is no Single Ticket winner on Friday.

Saturday is California Cup Day and 56 horses have been entered to run in the Rainbow Six sequence, races five through 10, making average field size 9.3 runners per race.

Santa Anita Park extends its heartfelt condolences to the family and friends of the track’s all-time longest tenured bartender, Frank Panza, who passed away Wednesday evening at age 91 following a lengthy battle with cancer.  A longtime resident of Laguna Niguel, Panza, who passed away at home with his sister Gloria by his side, negotiated a 65-mile daily commute to work at what he often described as a “dream job.”

Employed for some 59 years at Santa Anita and known to thousands of racegoers over the years as a tremendous mixologist and valued friend and confidant in the original Turf Club Chandelier Room and later, in the track’s main Club House bar, was the very definition of top-shelf customer service, as he greeted regulars and newcomers alike with a sunny disposition and unflagging attention to detail.

Panza, who was born May 28, 1930 in Ohio, first came to work at Santa Anita in December, 1961 and he served some of the biggest names in the worlds of entertainment and sports throughout an amazing career that ended due to a COVID related shutdown on March 8, 2020.

Retired LA Times columnist Chris Erskine described Panza thusly in a story written Oct. 29, 2014: “This Panza guy’s still a beautiful thing, though.  Look at the hair, thick as a turf course.  The smile, full of Italian Twinkle.  And listen to his stories, gleaned from a half century as Santa Anita’s Damon Runyon.”

“There’ll never be another bar like that,” he said in reference to the Chandelier Room.  “I couldn’t wait to come to work.  They would come in minks, dressed to the hilt.  Elizabeth Montgomery used to bring me ties…I don’t think there’s a saloon in the world that had that kind of clientele.  I was like a kid in a candy store.”

And later, Erskine asked Panza, who was himself a dues-paying SAG member and bit television and movie actor, who in all the years he worked, was his favorite customer.

“The greatest, Sinatra.  He used to call me Frangi.  My Italian nickname.”

Funeral services for Frank Panza will take place this coming week with a memorial to follow here at Santa Anita in February.

Rest in Peace, Frank, may you never be forgotten.

FINISH LINES: In addition to Frank Panza, Santa Anita has also lost another pair of outstanding employees, Club House Battery Manager and Assistant Wardrobe Manager Bill Dixon and longtime Stable Superintendent Tom Fator.  Dixon, a U.S. Marine Corps veteran who worked at Santa Anita from 1996 until his final day at the track, Dec. 10, 2021, passed at age 62 following a brief illness on Thursday morning.  Intuitive, passionate and a lover of racing, Dixon will be sorely missed by all of those who knew him.  Fator, a former exercise rider who was the son of a jockey, worked for decades not only at Santa Anita, but at Hollywood Park and Del Mar as well.  Popular with all of those with whom he worked, Fator passed away following a stroke on Jan. 2 at age 90 at Arcadia Methodist Hospital…Ciaran Thornton of Horseplayer will be host Tom Quigley‘s guest handicapper Sunday, 11:20 a.m., in the East Paddock Gardens . . . There were 96 recorded workouts Friday, 19 on the training track . . . Special early first post time for a 10-race Cal-Cup card on Saturday is at 12 noon.  There will be holiday racing this Monday, Jan. 17, Martin Luther King Jr. Day, featuring the Grade III Astra Stakes for older fillies and mares at 1 ½ miles on the hillside turf course. One dollar sodas and beers, along with two dollar hot dogs, will be offered throughout the day.