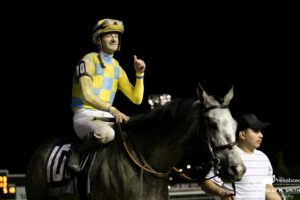 It got a little worse when his duo of Enforceable and Lynn’s Map both drew the far outside post positions for the Lecomte — which annually kicks off the “Road to the Kentucky Derby” at the Fair Grounds in New Orleans. Tough spots to start any race. Tougher spots to gain valuable points.

It got a little more complex when Casse decided to scratch Lynn’s Map — who had already won over the track — and point him to the Southwest Stakes at Oaklawn Park. That left Enforceable. A talented son of the great Tapit, and full of potential. No doubt. But that left with Enforceable. A horse that had not won another race other than a maiden, and had run 4th in the Kentucky Jockey Club Stakes and 3rd in the Claiborne Breeders’ Futurity in the last two starts of 2019.

It was a world of question marks.

That ended up with, perhaps, an exclamation point.

On Saturday, Enforceable looked more like a force to be reckoned with and a serious and emerging contender for this year’s Triple Crown. Despite breaking at the rear of the pack and allowed to bide his time in the early going, Enforceable are with a run that sparked both interest and raves. Moving 4-wide, and then 5-wide, and ultimately 6-wide, Enforceable and rider Julien Leparoux motored past all of his would-be contenders and ran off to a 11/2-length victory.

Suddenly, there was an emerging 3YO.

Suddenly, Casse may have found his Derby horse.

This week, Enforceable leaped into “The Pressbox’s KY Derby Rankings” Top 20 List, and leap-frogged some of the would-be contenders. It will be interesting to watch what happens from here, but the next War of Will may have been found. 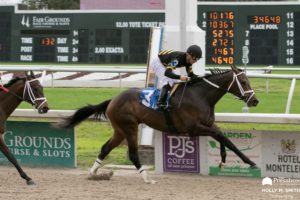 Another horse to make a splash last week was Blackberry Wine — a 3YO son of Oxbow who is trained by Joe Sharp for owner Calumet Farm. On Saturday, this speedster ran off to an impressive win over the highly touted Digital and Chestertown in a 11/16-mile allowance race at the Fair Grounds.

At one time in the stretch, Blackberry Wine — who led from the get-go — was corralled and passed by Digital. It looked like the eventual winner was all done. In fact, he fell about 1/2-length behind.

But the gutty colt rallied under the careful management of rider Adam Beschizza and retook the lead headed to the wire, pulling out a length victory.

Endurance may be a question with this one. Guts is not.

He jumps into the rankings for the first time, too.

Here’s a look at our current rankings: